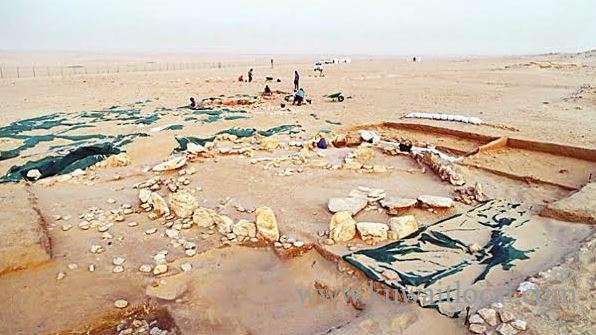 A team of archaeologist has discovered a 7500-year-old temple city in the Bahra 1 site, which is located in the northern coast of Kuwait Bay.

Led by Professor Piotr Bielinski of the Polish Centre of Mediterranean Archaeology (PCMA) at the University of Warsaw, the team also included the Kuwaiti archaeologists Sultan al-Duweish and Hamid al-Mutairi.

The discovery, which included a temple and public plaza, suggests an advanced society which existed in Kuwait more than seven millennia ago.

"Indications suggest that it was a building with a cultic (religious) function and it combines elements of the Ubaid culture", said Professor Bielinski.

The Ubaid civilisation, which was little known, was the first agricultural settlers to move into the region which would later become Sumer in the southernmost region of ancient Mesopotamia.

The ancient culture is characterised by large village settlements, with sophisticated irrigation techniques and the appearance of the first temples.

Further research may prove the buildings are the oldest of its kind not only in Kuwait but also in the whole Arabia Gulf region and even the whole world.

Archaeologists have also discovered at least ten other structures and 16,000 pottery fragments in the site.

Bahra 1 is the largest Ubaid settlement found on the Arabian Peninsula.

Gradual Implementation Of Total Curfew As Per Areas In Country Stringent measures have been enforced due to frequent increase in infection of coronavirus virus where marginal laborer are densely accommodated to contain the spread of infection. Sources stated t... April 01, 2020 0 7792 Category: Coronavirus

Total Ban Options On Government Table Today The possibility of enforcing a full curfew is among the  options on the agenda of the Council of Ministers in their meeting tonight, Al Rai newspaper disclosed that a high ranking government reve... March 31, 2020 0 5779 Category: Coronavirus

28 New Coronavirus Cases - 24 Indians And 2 Bangaldeshi Among Them - Total 317 Apr 1: The Kuwaiti Ministry of Health announced Wednesday that 28 people were infected by the novel coronavirus, in the last 24 hours. Total confirmed virus cases are 317 1 case Kuwaiti national... April 01, 2020 0 5025 Category: Coronavirus