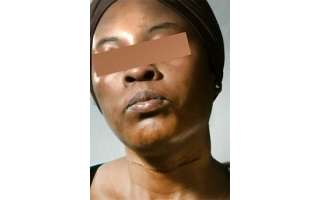 A Ugandan housemaid working in Kuwait was allegedly beaten and assaulted by her employers after taking a half day off for the Eid Al-Fitr holiday. She spoke with Kuwait Times to relate her ordeal and plead for help from authorities. Fatima, a mother of two, arrived in Kuwait from Uganda nearly two years ago.

Though promised a high paying sales clerk position, she ended up with a maid’s recruitment agency and was contracted out to serve as a maid in a private home. “I was hired from Uganda and was optimistic at first to work and change our lives. I was told by my recruiter that I will be working in the supermarket as a saleslady with KD 250 salary monthly. But when I came, I was sold to a Kuwaiti family and forced to work as housemaid. I did not complain anymore since it is too late and also because in my mind I wanted to get back the KD 340 I spent just to get the job here,” she said.

After 19 months work without a day off, Fatima asked for a break during the Eid holiday. Her sponsor is currently abroad on holiday so she asked the sponsor’s children (who also live in the same house) if she could go out for a few hours. The employers agreed. But on the first day of the Eid holiday, the employers left in the morning saying that they would be back at the agreed upon time so she could go out. “They agreed I could go out on the first day of Eid in the morning. But they left at that time, and they told me to wait,” the 28-year-old told Kuwait Times. “I waited until 4:00 pm but still no one came home. So I decided to go out without them. Anyway they knew that I was taking a day off,” she explained.

Nightmare begins
But her holiday turned into a nightmare when she returned to her employer’s house. “At around 7:00 pm, I had barely crossed the gate when my employers grabbed my clothes and started beating me on my face. Other family members came out and they punched and assaulted me physically, three of them (referring to the two sons and daughter of her sponsor). They smashed my head into the floor, they stepped on my body with their shoes; spat on my face and kicked my body everywhere,” Fatima claimed. Fatima showed this reporter several bruises on her face and body along with a medical report from the ambulance. Fatima said she was strangled too, showing the scar on her neck. “I do not know whether they wanted to kill me or something so I just cried and begged them to stop. I also shouted at that time hoping that our neighbors could hear my cries,” she said. Fatima’s nightmare was far from over.

Picked up by a police patrol outside the house, she was taken to the police station in Shuhada. Bleeding profusely, the police called an ambulance and the paramedics took her to Mubarak Hospital. But the hospital staff refused to treat her as she did not have the KD 2 for the required stamp. “I said I do not have any money in my pocket so the police brought me back to the police station. There I was jailed for one and a half days. The police called my employer and pressured them to take me out from the police station because there was no case or reason for me to stay in police custody,” Fatima explained. “They came that day and took me instead to the airport; they bought me a ticket to Uganda,” she said. (The flight would take her to Dubai, then Cairo before reaching Kampala).

Attempted deportation
But in the airport, Fatima refused to leave Kuwait because the bag which her employers brought and said to contain her personal belongings was empty. “They said that all my things were in the bag but I told them I want to inspect the bag. They would not allow me, saying that it was already checked. So I refused and said I would not leave without my stuff. They tried to call another police officer to scare me off, but the policeman who responded was friendly. I explained to him and he said to check the bag. But when I opened the bag, it was empty.” When she saw the empty bag, she refused to board the plane. Fatima claims that she was also missing KD 100 and a cellphone that she had in her bag at her sponsor’s house. She appealed to the police officer for help. “The policeman told my employer to return everything to me and suggested that I go home with them. But I refused to go back to their house alone because I was afraid they would kill me. So the policeman told me to call friends or anyone I knew in Kuwait so I could stay with them for a while. That was when I contacted the Ugandans in Kuwait Association, and they rescued me,” she said.

No embassy, still some help
Since there is no embassy of Uganda in Kuwait, the association is the next best alternative for Ugandan nationals in trouble here. The ‘Ugandans in Kuwait Association’ headed by Nsubuga Ali Bashir tries to help other Uganda nationals here. “We do not have embassy here, so problems such as this usually come to our attention through our association. I am very active in rescuing our compatriots with Kamugegeya Fahadie, my Vice Chairman and with my secretary Nandaula Prudence. We have about 600 domestic helpers in Kuwait and we want them to be protected by the Kuwaiti government,” he said. “We do not have lawyers to defend our rights; so I hope by bringing this incident to the attention of the media we will be able to get the proper support and hope we’ll get to hold the employer liable. We want lawyers or any NGOs to help us in this case and we are going to recommend to our government to temporary suspend the deployment of Ugandan workers to Kuwait till we are completely protected,” he mentioned.

Business Drop By 95%, Alshaya Has Prepared To Reduce Costs Several businesses in Kuwait have begun feeling the pinch as a result of the measures taken by the government to contain the spread of coronavirus. Kuwait once a thriving market for retail and travel ... April 02, 2020 0 13342 Category: Kuwait

Gradual Implementation Of Total Curfew As Per Areas In Country Stringent measures have been enforced due to frequent increase in infection of coronavirus virus where marginal laborer are densely accommodated to contain the spread of infection. Sources stated t... April 01, 2020 0 8145 Category: Coronavirus

Coronavirus Cases In Mahboula On The Rise,MOH Officials Warned Residents To Stay Home Ministry of Health officials have warned residents of Mahboula area to taken extra precautionary measures and not venture outside unless absolutely necessary. In a video that has gone viral, a ministr... March 30, 2020 0 6088 Category: Coronavirus

Total Ban Options On Government Table Today The possibility of enforcing a full curfew is among the  options on the agenda of the Council of Ministers in their meeting tonight, Al Rai newspaper disclosed that a high ranking government reve... March 31, 2020 0 5984 Category: Coronavirus

28 New Coronavirus Cases - 24 Indians And 2 Bangaldeshi Among Them - Total 317 Apr 1: The Kuwaiti Ministry of Health announced Wednesday that 28 people were infected by the novel coronavirus, in the last 24 hours. Total confirmed virus cases are 317 1 case Kuwaiti national... April 01, 2020 0 5164 Category: Coronavirus

7 Indians Infected From Contact With Confirmed Coronavirus Case The Kuwaiti Ministry of Health announced Monday that 11 people were infected by the novel coronavirus, known as COVID-19, in the last 24 hours. With this, the total number of Indians confirmed with co... March 30, 2020 0 4823 Category: Coronavirus

Strict Curfew In Jleeb Al Shuyoukh Jleeb Al Shuyouk has come under the radar of the Ministry of Health who have begun taking rounds in the area to ensure precautionary measures are being followed to contain the spread of coronavirus. ... March 31, 2020 0 4422 Category: Automotive
Popular Videos