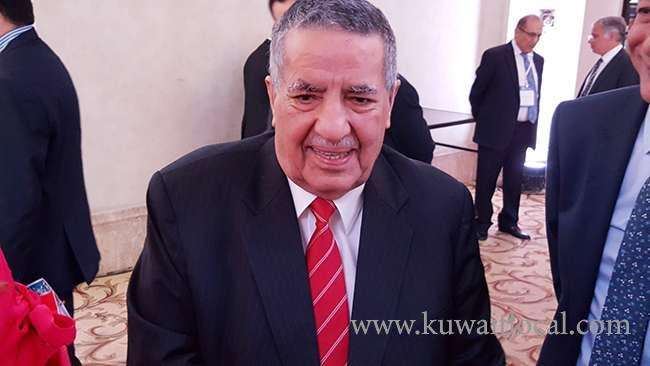 Chairman of the Kuwait Chamber of Commerce and Industry Ali Al-Ghanim has stressed the importance of economic relations amongst Arab countries that play a key role in development of the Arab world.

Al-Ghanim made the statement to KUNA Tuesday on the conclusion of the Arab Economic Forum hosted by Lebanon, referring that Kuwait contributed to establishing the forum, which serves the cohesion of Arab economy.

The State of Kuwait has taken several measures, enacted laws, allowed to establish companies and signed agreements with some countries to reduce oil dependence, he said.

He referred to the Gulf efforts made in this respect, expressing his confidence that there are several fields for diversifying economy in GCC member states.

The event constitutes an opportunity for a number of Arab economists who play a key role in developing economy to share expertise, he said.

Vice President of Council of Saudi Chambers Saleh Al-Afaliq told KUNA that oil price fluctuations are unlikely a main factor, which affects Arab economy, as prices witness a decrease and a rise through an economic course.

There are challenges like security risks, combating corruption and creating jobs in the Arab world, he stressed. Every Arab country seeks to solve its own problems, and all Arab countries, at the same time, work together to achieve Arab economic integration in order to form an economic unity in the face of world's countries, he said.

During today's discussions, the conferees focused on the current situations in the Arab region on economic, security and political levels, and their repercussions on the development march, and social, political and economic stability of the region's states.

It included three sessions in which a number of Arab economists, academics and media people took part. The first one discussed region's horizons amid economic and political crises, and their repercussions on political and economic levels, while the second session dealt with the economic vision and reform challenges as well as creating jobs.

The last one concentrated on Lebanon's economic challenges in the current period, and priorities and demands of reviving economy.

Legal Action Against Sponsors Encouraging Workers To Leave Mahboula Area Kuwait Ministry of Interior (MoI) stopped expatriate workers from leaving Mahboula Area, south of Kuwait City, as instructed by their sponsors and ordered them to return to their homes, the ministry s... April 06, 2020 0 12670 Category: Coronavirus

Two Apartments In Mirqab Packed With 95 Asians 95 expats were forced to live in two apartments in a building in the Al-Mirqab area which evoked condemnation from the governor of the capital, Sheikh Talal Al -Khaled. Most of the expatriates are ... April 10, 2020 0 8249 Category: Coronavirus

Secretary Working in KOC Tested Positive for Coronavirus (Covid 19) An Indian secretary working for a contracting company for Kuwait Oil Company was found infected with coronavirus, Al Rai reported today. The paper said that 12 cases of contact with the secretary were... April 07, 2020 0 8025 Category: Coronavirus

Decissions Taken By Kuwait Cabinet Thursday April 9th 2020 • Task of specialized teams and stakeholders to prepare and complete all the necessary requirements to develop operational plans to deal with the status of the comprehensive ban on tour in all ar... April 09, 2020 0 8014 Category: Coronavirus

Expats Left 300 Vehicles In Jleeb 300 vehicles which were parked on an open ground in Ishbiliya. These vehicles belong to expatriates who escaped after news spread that Jleeb Al- Shuyoukh was one of the regions where total curfew was ... April 09, 2020 0 7871 Category: Automotive

Lockdown Jleeb & Mahboula and Curfew Time Extended The council of Ministers, in its extra ordinary cabinet meeting today decided to extend the curfew hours until six in the morning. The curfew will be from 5:00 pm till next day morning 6:00 am In a... April 06, 2020 0 7559 Category: Coronavirus

All Vegetables , Fruits And Onions Available In Kuwait Central Vegetable Market After the end of partial curfew hours the representatives of cooperative societies were asked to allow to collect the onions so that it will reach consumers faster. Availability of all vegetables a... April 09, 2020 0 7346 Category: General

Legal Measures Will Be Taken Immediately On Housing Bachelors In Residential Areas The Minister of State for Municipal Affairs, Eng. Walid Al-Jasim, has state that he has directed concerned departments in the municipality to receive complaints by WhatsApp 24727732 about housing bach... April 07, 2020 0 7238 Category: Automotive

No Decision Of Full Curfew In Mahboula , Farwaniya And Jleeb Shyoukh Yet No official instructions have been received yet by the Ministry of Interior to impose full curfew in Jleeb Al Shuyouk, Mahboula and Farwaniya, as claimed by some social media sites. News circulating t... April 06, 2020 0 5392 Category: Coronavirus
Popular Videos