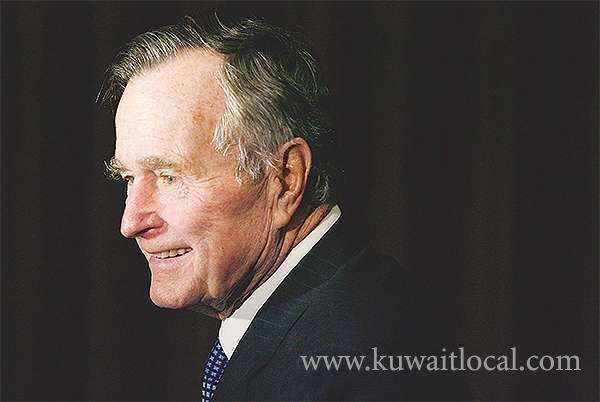 George Herbert Walker Bush, World War II naval aviator, Texas oil pioneer, and 41st President of the United States of America, died on November 30, 2018. He was 94 and is survived by his fi ve children and their spouses, 17 grandchildren, eight great-grandchildren, and two siblings. He was preceded in death by his wife of 73 years, Barbara; his second child Pauline Robinson “Robin” Bush; and his brothers Prescott and William or “Bucky” Bush.

Funeral arrangements will be announced as soon as is practical.

In his cable, His Highness the Amir said on behalf of the Kuwaiti government and people, he expressed sincere condolences on the passing of President George H.W. Bush, the 41st President of the United States of America.

His Highness the Amir recalled George H.W. Bush’s historic stands and support to Kuwait and his rejection of the Iraqi occupation in its early hours, including the decisions taken by the American administration under the leadership of Bush and his pivotal role in forming an international coalition, mandated by the UN to liberate the State of Kuwait. His Highness the Amir sent similar cables of condolences to President George W. Bush, the 43rd President of the United States of America and the deceased president’s family.

His Highness the Crown Prince Sheikh Nawaf Al-Ahmad Al-Jaber Al-Sabah and His Highness the Prime Minister Sheikh Jaber Al-Mubarak Al-Hamad Al-Sabah sent similar cables to Trump, marking the occasion. The First Deputy Prime Minister and Minister of Defence Sheikh Nasser Sabah Al-Ahmad Al-Sabah also sent cables of condolences on Saturday to Trump over the death of US 41st President George Bush, as well as to the family of the deceased president.

Kuwait paid tribute to former US president George H.W. Bush on Saturday, saying his support during the first Gulf War “will not be forgotten”. Kuwaitis have long expressed their gratitude to the late 41st president for backing the tiny Gulf country following Iraq’s 1990 invasion. In the wake of the war, many stuck bumper stickers on their cars of Bush standing in front of an American flag, and a few even named their children after him. “Bush was an icon,” said Farida al-Habib, a cardiologist who says she smuggled medicine to Kuwaiti forces during the invasion. “I cried when I heard the news about his death,” she added. Bush died on Friday at the age of 94.

In a letter to Trump, HH the Amir praised Bush’s “historic and courageous stance … and his rejection of Iraq’s occupation of Kuwait from the early hours”. His support “will remain in Kuwait’s collective memory and will not be forgotten,” he added.

“On behalf of the Kuwaiti government and people, I express my deepest condolences and utmost sympathy.” After dictator Saddam Hussein ordered the invasion of Kuwait in August 1990, Bush deployed hundreds of thousands of US troops to the neighbouring Kingdom of Saudi Arabia – urging other countries to do the same. A US-led coalition expelled Iraqi forces from Kuwait in a lightning campaign at the beginning of 1991. Abu Fahad, a Kuwaiti army officer during the invasion who declined to give his full name, said he was “very saddened” by Bush’s death. “He stood by us even though he was not a Muslim,” he said. Bush visited Kuwait in 1993 and was hailed as a “guest of honour”. Tributes have poured in online for Bush following news of his death. “We will never forget you,” Twitter user Manal wrote. Lights at the landmark Kuwait Towers were set to be shut off Saturday evening and replaced with an image of Bush with Kuwaiti and American flags, the State’s information ministry said. The Gulf nations of Qatar, the United Arab Emriates and Oman also sent letters of condolence to Trump and Bush’s son, former president George W. Bush. George H.W. Bush, a patrician New Englander whose presidency soared with the coalition victory over Iraq in Kuwait, but then plummeted in the throes of a weak economy that led voters to turn him out of office after a single term, has died. He was 94. The World War II hero, who also presided during the collapse of the Soviet Union and the final months of the Cold War, died late Friday night at his Houston home, said family spokesman Jim McGrath. His wife of more than 70 years, Barbara Bush, died in April 2018. Bush will be honored with a funeral at Washington’s National Cathedral, White House press secretary Sarah Sanders said Saturday. President Trump and First Lady Melania Trump will attend, she said.

The son of a senator and father of a president, Bush was the man with the golden resume who rose through the political ranks: from congressman to UN ambassador, Republican Party chairman to envoy to China, CIA director to two-term vice-president under the hugely popular Ronald Reagan. The 1991 Gulf War stoked his popularity. But Bush would acknowledge that he had trouble articulating “the vision thing,” and he was haunted by his decision to break a stern, solemn vow he made to voters: “Read my lips. No new taxes.” He lost his bid for re-election to Bill Clinton in a campaign in which businessman H. Ross Perot took almost 19 percent of the vote as an independent candidate. Still, he lived to see his son, George W., twice elected to the presidency – only the second father-and-son chief executives, following John Adams and John Quincy Adams. The 43rd president issued a statement Friday calling the elder Bush “a man of the highest character.”

“The entire Bush family is deeply grateful for 41’s life and love, for the compassion of those who have cared and prayed for Dad,” the statement read. After his 1992 defeat, George H.W. Bush complained that media-created “myths” gave voters a mistaken impression that he did not identify with the lives of ordinary Americans. He decided he lost because he “just wasn’t a good enough communicator.”

Once out of office, Bush was content to remain on the sidelines, except for an occasional speech or paid appearance and visits abroad. He backed Clinton on the North American Free Trade Agreement, which had its genesis during his own presidency. He visited the Middle East, where he was revered for his defense of Kuwait. And he returned to China, where he was welcomed as “an old friend” from his days as the US ambassador there.

He later teamed with Clinton to raise tens of millions of dollars for victims of a 2004 tsunami in the Indian Ocean and Hurricane Katrina, which swamped New Orleans and the Gulf Coast in 2005. During their wide-ranging travels, the political odd couple grew close.

“Who would have thought that I would be working with Bill Clinton, of all people?” Bush quipped in October 2005. In his post-presidency, Bush’s popularity rebounded with the growth of his reputation as a fundamentally decent and well-meaning leader who, although he was not a stirring orator or a dreamy visionary, was a steadfast humanitarian. Elected officials and celebrities of both parties publicly expressed their fondness. After Iraq invaded Kuwait in August 1990, Bush quickly began building an international military coalition that included other Arab states. After liberating Kuwait, he rejected suggestions that the US carry the offensive to Baghdad, choosing to end the hostilities a mere 100 hours after the start of the ground war. “That wasn’t our objective,” he told The Associated Press in 2011 from his office just a few blocks from his Houston home.

“The good thing about it is there was so much less loss of human life than had been predicted and indeed than we might have feared.” But the decisive military defeat did not lead to the regime’s downfall, as many in the administration had hoped. “I miscalculated,” acknowledged Bush. His legacy was dogged for years by doubts about the decision not to remove Saddam Hussein. The Iraqi leader was eventually ousted in 2003, in the war led by Bush’s son that was followed by a long, bloody insurgency. George H.W. Bush entered the White House in 1989 with a reputation as a man of indecision and indeterminate views. One newsmagazine suggested he was a “wimp.”

But his work-hard, play-hard approach to the presidency won broad public approval. He held more news conferences in most months than Reagan did in most years. The Iraq crisis of 1990-91 brought out all the skills Bush had honed in a quarter-century of politics and public service. After winning United Nations support and a green light from a reluctant Congress, Bush unleashed a punishing air war against Iraq and a five-day ground juggernaut that sent Iraqi forces reeling in disarray back to Baghdad. He basked in the biggest outpouring of patriotism and pride in America’s military since World War II, and his approval ratings soared to nearly 90 percent. The other battles he fought as president, including a war on drugs and a crusade to make American children the best educated in the world, were not so decisively won. He rode into office pledging to make the United States a “kinder, gentler” nation and calling on Americans to volunteer their time for good causes – an effort he said would create “a thousand points of light.”

Gradual Implementation Of Total Curfew As Per Areas In Country Stringent measures have been enforced due to frequent increase in infection of coronavirus virus where marginal laborer are densely accommodated to contain the spread of infection. Sources stated t... April 01, 2020 0 7793 Category: Coronavirus

Total Ban Options On Government Table Today The possibility of enforcing a full curfew is among the  options on the agenda of the Council of Ministers in their meeting tonight, Al Rai newspaper disclosed that a high ranking government reve... March 31, 2020 0 5779 Category: Coronavirus