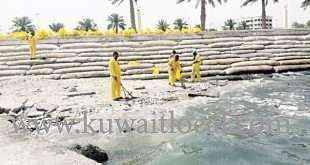 A combination of natural and unnatural causes had triggered a recent rise in fish deaths, a Kuwait Institute for Scientific Research (KISR) study found on Thursday. In a statement issued to KUNA, KISR noted that around 1,000,000 cubic meters of rancid sewage has spilled into the bay of Kuwait, carrying with it high concentrations of toxic pollutants.

Moreover, the statement added that KISR’s study has been backed up by research conducted by the Environment Public Authority (EPA), which indicated that the waters of Kuwait Bay have been contaminated due to the sewage spill.

On water temperatures at Kuwait Bay during the month of April, the statement showed that it fluctuated between 23.6 to 27.1 degrees, while salinity was at 43 to 44 percent.

The statement also pointed out that bacteria are not one of the causes of the deaths and that the fish were in a state of sheer physical exhaustion, which ultimately led to their deaths.

The KISR study underscored that the spike in fish deaths is the result of numerous factors, all of which have caused a reduction in the purity and quality of the waters.

The study also listed China, the United States, Italy, India and Kenya, amongst others, as countries that have also witnessed a surge in fish deaths

Labour Camp In Mahboula Quarantined After Technician Tested Positive Covid19 A labour camp in Mahboula area housing almost 600 workers has been quarantined informed sources told The Times, Kuwait On discovery that one Indian technician who was staying at the camp was tested CO... March 28, 2020 0 7033 Category: Automotive

Coronavirus Cases In Mahboula On The Rise,MOH Officials Warned Residents To Stay Home Ministry of Health officials have warned residents of Mahboula area to taken extra precautionary measures and not venture outside unless absolutely necessary. In a video that has gone viral, a ministr... March 30, 2020 0 5595 Category: Coronavirus

7 Indians Infected From Contact With Confirmed Coronavirus Case The Kuwaiti Ministry of Health announced Monday that 11 people were infected by the novel coronavirus, known as COVID-19, in the last 24 hours. With this, the total number of Indians confirmed with co... March 30, 2020 0 4626 Category: Coronavirus

Gulf Bank Postpones Loans And Credit Card Installments Gulf Bank will postpone all installments of consumer loans and credit cards for six months for all Gulf Bank customers. Moreover, all interest and fees related to these transactions will be waived. Th... March 29, 2020 0 4037 Category: Coronavirus

Strict Curfew In Jleeb Al Shuyoukh Jleeb Al Shuyouk has come under the radar of the Ministry of Health who have begun taking rounds in the area to ensure precautionary measures are being followed to contain the spread of coronavirus. ... March 31, 2020 0 3999 Category: Automotive