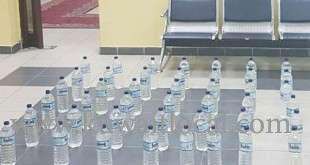 Customs officers at Shuwaikh Port succeeded in foiling an attempt to smuggle 3,600 bottles of imported “Red Label” liquor and 60,000 packs of betel leaves (paan) into the country.

The contraband was hidden professionally in an almost undiscoverable manner inside several Central Processing Unit (CPU) cases of computers in a shipping container. Director General of General Customs Administration Counselor Jamal Al-Jalawi had monitored the procedures followed by customs officers for seizing the contraband.

Al-Jalawi explained that the inspectors had noticed the shipment at the port and had been monitoring it for 90 days, as no one had come forward to claim it. After obtaining the necessary authorization, the shipment was opened and they found large number of imported liquor bottles as well as large quantities of betel leaves (paan) which are banned in Kuwait.

As a warning to those who plan to smuggle illicit items in Kuwait, Al-Jalawi said, “Kuwait is not an easy target. Our men will thwart each of your attempts with resolve and determination.” A member of the Customs Media Committee and the Inspection Supervisor at Shuwaikh Port Musaed Al-Hulailah explained that the liquor bottles and the betel leaves were hidden inside CPU cases in a 40-feet container that came from an Arab country. When the inspectors thoroughly examined and combed through the container, they discovered that each CPU case contained six bottles of “Red Label” liquor. They confiscated a total of 3,600 bottles from the container.

Coronavirus Cases In Mahboula On The Rise,MOH Officials Warned Residents To Stay Home Ministry of Health officials have warned residents of Mahboula area to taken extra precautionary measures and not venture outside unless absolutely necessary. In a video that has gone viral, a ministr... March 30, 2020 0 5566 Category: Coronavirus

7 Indians Infected From Contact With Confirmed Coronavirus Case The Kuwaiti Ministry of Health announced Monday that 11 people were infected by the novel coronavirus, known as COVID-19, in the last 24 hours. With this, the total number of Indians confirmed with co... March 30, 2020 0 4603 Category: Coronavirus

Gulf Bank Postpones Loans And Credit Card Installments Gulf Bank will postpone all installments of consumer loans and credit cards for six months for all Gulf Bank customers. Moreover, all interest and fees related to these transactions will be waived. Th... March 29, 2020 0 3974 Category: Coronavirus

Strict Curfew In Jleeb Al Shuyoukh Jleeb Al Shuyouk has come under the radar of the Ministry of Health who have begun taking rounds in the area to ensure precautionary measures are being followed to contain the spread of coronavirus. ... March 31, 2020 0 3841 Category: Automotive

9 Indians And 3 Bangladeshi Among 20 New Coronavirus Infected Persons The Kuwaiti Ministry of Health announced on Sunday that a further 20 people were infected by the novel coronavirus, known as COVID-19, in the last 24 hours. This brings the Gulf country’s tally ... March 29, 2020 0 3810 Category: Coronavirus