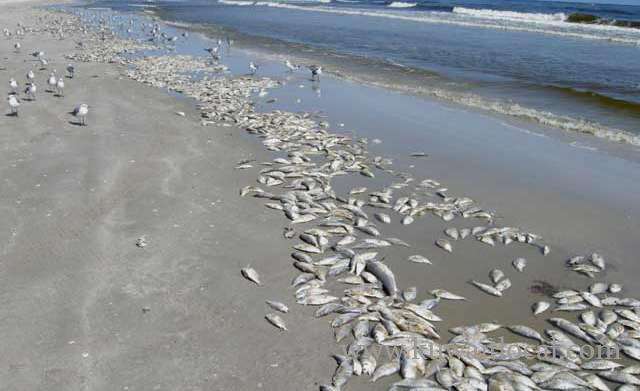 The Environment Public Authority (EPA) is carrying on with surveying Kuwait's waters in a follow-up of the fish mortality in Kuwait Bay, an EPA official said on Thursday. A survey mission conducted from the Sabah Al Ahmad Base, All-Fintas, to the bay found little amounts of dead fish near the Shuwaikh Port, EPA's Deputy Director General for Technical Monitoring Affairs Eng. Mohammed Al-Enezi told KUNA.

The mission also collected some samples of seawater and plankton and sent them to labs. Al-Enezi, who is also deputy head and spokesman of the national committee for fish mortality, added that they held a meeting this morning chaired by the Public Authority for Agriculture Affairs and Fish Resources (PAAFR).

Two teams were formed, one for monitoring and control, and the other for collecting and analyzing data, he said. In addition, the meeting approved the activation of the national plan on fish mortality, as well as defining role of each of the member authorities in the team. The EPA is strictly enforcing the environment law and is dealing with the issue with full transparency, Al-Enzi stressed. He said that there are some 50 sewers still pouring their waste water in the Bay.

According to Al-Enezi, some official and private bodies have been referred to the Prosecution pertaining to the issue. More will follow over the coming few days. Unluckily, this contamination problem dates back to about 30 years, he said, adding that up to 100,000 square meters of untreated water is poured into the Bay. The EPA has lifted up to 60 tons of catfish dead fish over that period.

Legal Action Against Sponsors Encouraging Workers To Leave Mahboula Area Kuwait Ministry of Interior (MoI) stopped expatriate workers from leaving Mahboula Area, south of Kuwait City, as instructed by their sponsors and ordered them to return to their homes, the ministry s... April 06, 2020 0 12663 Category: Coronavirus

Two Apartments In Mirqab Packed With 95 Asians 95 expats were forced to live in two apartments in a building in the Al-Mirqab area which evoked condemnation from the governor of the capital, Sheikh Talal Al -Khaled. Most of the expatriates are ... April 10, 2020 0 8130 Category: Coronavirus

Secretary Working in KOC Tested Positive for Coronavirus (Covid 19) An Indian secretary working for a contracting company for Kuwait Oil Company was found infected with coronavirus, Al Rai reported today. The paper said that 12 cases of contact with the secretary were... April 07, 2020 0 8023 Category: Coronavirus

Decissions Taken By Kuwait Cabinet Thursday April 9th 2020 • Task of specialized teams and stakeholders to prepare and complete all the necessary requirements to develop operational plans to deal with the status of the comprehensive ban on tour in all ar... April 09, 2020 0 7968 Category: Coronavirus

Expats Left 300 Vehicles In Jleeb 300 vehicles which were parked on an open ground in Ishbiliya. These vehicles belong to expatriates who escaped after news spread that Jleeb Al- Shuyoukh was one of the regions where total curfew was ... April 09, 2020 0 7864 Category: Automotive

Lockdown Jleeb & Mahboula and Curfew Time Extended The council of Ministers, in its extra ordinary cabinet meeting today decided to extend the curfew hours until six in the morning. The curfew will be from 5:00 pm till next day morning 6:00 am In a... April 06, 2020 0 7559 Category: Coronavirus

All Vegetables , Fruits And Onions Available In Kuwait Central Vegetable Market After the end of partial curfew hours the representatives of cooperative societies were asked to allow to collect the onions so that it will reach consumers faster. Availability of all vegetables a... April 09, 2020 0 7331 Category: General

Legal Measures Will Be Taken Immediately On Housing Bachelors In Residential Areas The Minister of State for Municipal Affairs, Eng. Walid Al-Jasim, has state that he has directed concerned departments in the municipality to receive complaints by WhatsApp 24727732 about housing bach... April 07, 2020 0 7227 Category: Automotive

No Decision Of Full Curfew In Mahboula , Farwaniya And Jleeb Shyoukh Yet No official instructions have been received yet by the Ministry of Interior to impose full curfew in Jleeb Al Shuyouk, Mahboula and Farwaniya, as claimed by some social media sites. News circulating t... April 06, 2020 0 5392 Category: Coronavirus
Popular Videos