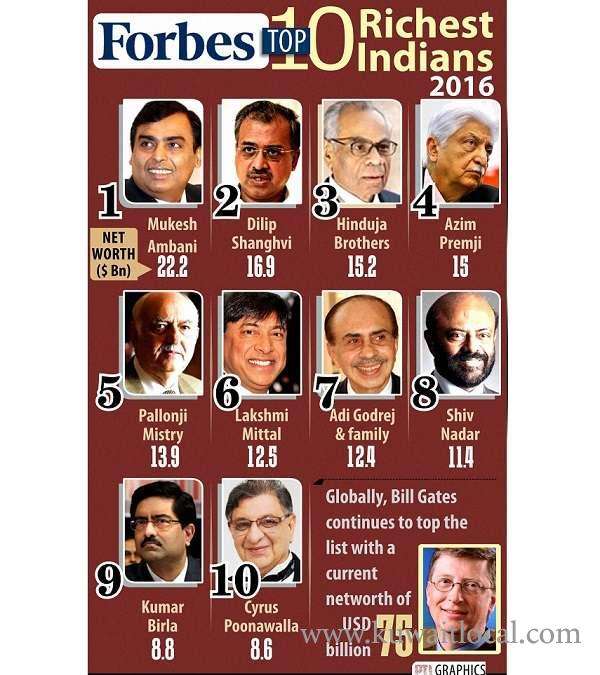 The 2016 ‘Forbes List of 100 Richest Indians’ includes many familiar names just moving up or down the ranking as well as a few new faces. The list also sees several non-resident Indians, particularly from the Gulf Cooperation Council (GCC) states, making it into the top-100. Together the net worth of 100 richest men and women in India was a whooping US$381 billion, a 10.45 percent increase on the combined wealth of $345 billion in 2015.

Topping the tycoons’ list is Reliance Industries Ltd (RIL) Chairman Mukesh Ambani with a net worth of $22.7 billion. In second spot was Dilip Shanghvi of Sun Pharmaceuticals with $16.9 billion and bringing up the rear in the top three places was the Hinduja brothers with a net worth of $15.2 billion.

India’s richest pharmaceutical magnate, Dilip Shanghvi’s wealth fell by $1.1 billion from the $18 billion in 2015 following a drop in the shares of his Sun Pharmaceutical Industries, the world’s fifth-largest generic medicines maker. Earlier this year, Sun Pharma acquired 14 drugs from Novartis in Japan for $293 million, which will be distributed by Mitsubishi Tanabe Pharma.

The Hinduja brothers who took third spot saw their net worth jump by 400 million from the $14.8 billion last year. The four siblings – Srichand, Gopichand, Prakash, and Ashok – control multinational empire Hinduja Group, with businesses ranging from trucks and lubricants to banking and cable television. The group commissioned its much-delayed 1,040 megawatt thermal power unit in South India in July.

Tech magnate Azim Premji, who has led Wipro for five decades, slips one spot to No 4 on the list with a net worth of $15 billion. Wipro, India’s third largest outsourcer, reported a 6 percent fall in net earnings to $304 million in a recent quarter amid sluggish sales. To boost growth, the company has been on a buying spree and its most recent acquisition was Health Plan Services, an insurance-technology firm based in Florida.

Reclusive tycoon Pallonji Mistry comes in No 5 with a net worth of $13.9 billion. His engineering and construction giant, the 151-year-old Shapoorji Pallonji Group, is reportedly negotiating to acquire a 51 percent stake in Karaikal Port in South India. He was the recipient of this year’s Padma Bhushan, one of India’s highest civilian awards.

The latest edition of Forbes Rich list also saw Yusuff Ali MA, Chairman of Abu Dhabi based Middle East retail chain Lulu Group who is placed 25th in the list with a net worth of $4 billion. Last year his net worth was US$ 3.7 billion. Yusuff Ali presides over $6.3 billion (revenue) LuLu Group, with 129 stores in the Gulf region, India, Egypt, Indonesia and Malaysia, Turkey and Brazil. New projects include a $300 million investment in Trivandrum in South India that will include a mall, hotel and convention center.

The group's hospitality arm owns Dubai's first Steinberger hotel, a German luxury hotel brand and a 50 percent stake in the Sheraton hotel in Muscat, which will reopen October this year after renovations and the legendary Old Scotland Yard building in London, slated to be open as a luxury hotel by early next year.

Other UAE-based NRIs to feature on the list include at Micky Jagtiani of Landmark Group at No 24 with $4.4 billion, Ravi Pillai of RP Group at No 38 with $3.1 billion; B.R. Shetty of NMC Healthcare at No 47 with $2.5 billion; Sunny Varkey of GEMS Education in 60th place; Sobha Group’s P.N.C. Menon in 78th; Azad Moopen of Aster DM Healthcare at 97th and Shamseer Vayalil of VPS Healthcare at 98th place.

Age Limit For Parents Visit Visa I am planning to bring my parents from India on a visitor’s visa for 1 month and both are aged 78 years and I am a doctor working in a private sector, is there a age limit to bring my parents. ... February 17, 2020 0 245 Category: Visit Visa

Expat Will Have To Pay KD2.5 In Fees The CEO of the Health Insurance Hospitals Company ‘Daman’ Dr Muhammad Al-Qana’i said the medical centers in Hawalli and Al-Farwaniya will receive the expatriates and called on everyo... February 19, 2020 0 164 Category: Expats