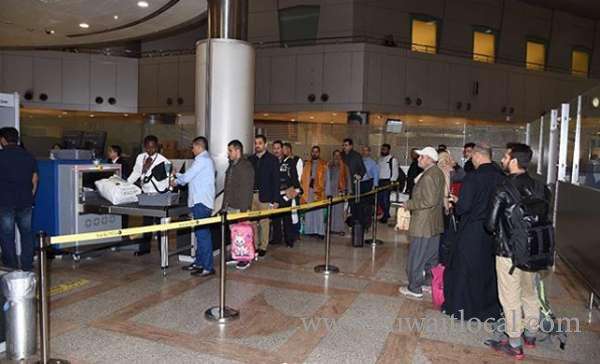 In the midst of expected increase in the number of expatriates who will avail the amnesty in the coming days, sources in the Ministry of Interior revealed that about 45,000 individuals who violated the Residency Law have benefited from the amnesty which was announced by the ministry to allow violators to amend their status or leave the country without paying fines.

At the same time, the Public Authority for Manpower revealed that about 23,500 employees in the private sector who were reported to have absconded after April 1, 2016 can also benefit from the decision to amend their status.

In the same context, sources in the ministry reported that about 25,000 Residency Law violators have left the country through land and air borders; whereas about 20,000 amended their status after paying fines.

Sources said it is expected that the number of those who will benefit from the amnesty, which ends on April 22, 2018, will increase and this is after the violators obtain travel documents from their embassies.

Sources called on the remaining 110,000 residency violators to benefit from the amnesty, adding the Public Authority for Manpower is receiving applications to lift absconding charges on those who wish to exit or amend their status before the amnesty period ends.

Business Drop By 95%, Alshaya Has Prepared To Reduce Costs Several businesses in Kuwait have begun feeling the pinch as a result of the measures taken by the government to contain the spread of coronavirus. Kuwait once a thriving market for retail and travel ... April 02, 2020 0 11952 Category: Kuwait

Gradual Implementation Of Total Curfew As Per Areas In Country Stringent measures have been enforced due to frequent increase in infection of coronavirus virus where marginal laborer are densely accommodated to contain the spread of infection. Sources stated t... April 01, 2020 0 8031 Category: Coronavirus

Coronavirus Cases In Mahboula On The Rise,MOH Officials Warned Residents To Stay Home Ministry of Health officials have warned residents of Mahboula area to taken extra precautionary measures and not venture outside unless absolutely necessary. In a video that has gone viral, a ministr... March 30, 2020 0 6052 Category: Coronavirus

Total Ban Options On Government Table Today The possibility of enforcing a full curfew is among the  options on the agenda of the Council of Ministers in their meeting tonight, Al Rai newspaper disclosed that a high ranking government reve... March 31, 2020 0 5897 Category: Coronavirus

28 New Coronavirus Cases - 24 Indians And 2 Bangaldeshi Among Them - Total 317 Apr 1: The Kuwaiti Ministry of Health announced Wednesday that 28 people were infected by the novel coronavirus, in the last 24 hours. Total confirmed virus cases are 317 1 case Kuwaiti national... April 01, 2020 0 5133 Category: Coronavirus

7 Indians Infected From Contact With Confirmed Coronavirus Case The Kuwaiti Ministry of Health announced Monday that 11 people were infected by the novel coronavirus, known as COVID-19, in the last 24 hours. With this, the total number of Indians confirmed with co... March 30, 2020 0 4801 Category: Coronavirus

Strict Curfew In Jleeb Al Shuyoukh Jleeb Al Shuyouk has come under the radar of the Ministry of Health who have begun taking rounds in the area to ensure precautionary measures are being followed to contain the spread of coronavirus. ... March 31, 2020 0 4409 Category: Automotive
Popular Videos