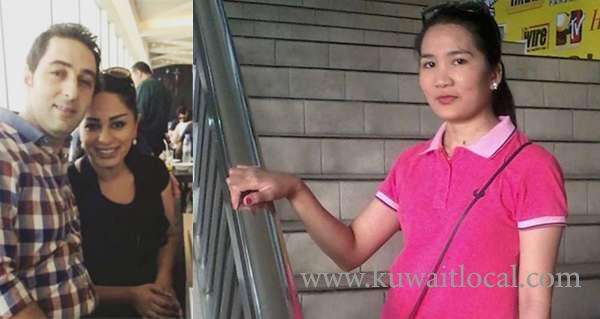 The Lebanese Interpol upon a request from its Kuwaiti counterpart is looking for the alleged murderers of Filipino domestic worker Joanna Daniela Demafelis, reports Al-Anba daily.

The mother said she was on a visit to Kuwait and saw the wife grabbing the victim by the hair and hitting her head on the wall.

The mother added, she then told her daughter-in-law to return her to the recruitment office if she was not satisfied with her work and the latter ignored. The mother added, she could not stick to the behavior of the wife and decided to leave Kuwait before the expiry of her visit visa. She went on to say she saw her son 10 months ago in a police station in Syria.

Philippine officials in Kuwait said they had been coordinating with their Kuwaiti counterparts to launch “rescue missions to save distressed OFWs from abusive employers and harsh working conditions.” They had also been conducting information campaigns to warn Filipinos from being victimized by illegal recruiters, the DFA said.

All Employees To Receive Full Salary Of April Month Without Any Deduction Citizens and expatriates will receive their full salaries in April without any loan deduction or other consumer installments, reports Al-Anba daily. The April salaries will be paid before the holy mon... April 05, 2020 1 14530 Category: General

Legal Action Against Sponsors Encouraging Workers To Leave Mahboula Area Kuwait Ministry of Interior (MoI) stopped expatriate workers from leaving Mahboula Area, south of Kuwait City, as instructed by their sponsors and ordered them to return to their homes, the ministry s... April 06, 2020 0 11285 Category: Coronavirus

Locck Down Jleeb & Mahboula and Curfew Time Extended The council of Ministers, in its extra ordinary cabinet meeting today decided to extend the curfew hours until six in the morning. The curfew will be from 5:00 pm till next day morning 6:00 am In a... April 06, 2020 0 7098 Category: Coronavirus

Secretary Working in KOC Tested Positive for Coronavirus (Covid 19) An Indian secretary working for a contracting company for Kuwait Oil Company was found infected with coronavirus, Al Rai reported today. The paper said that 12 cases of contact with the secretary were... April 07, 2020 0 7053 Category: Coronavirus

Legal Measures Will Be Taken Immediately On Housing Bachelors In Residential Areas The Minister of State for Municipal Affairs, Eng. Walid Al-Jasim, has state that he has directed concerned departments in the municipality to receive complaints by WhatsApp 24727732 about housing bach... April 07, 2020 0 5561 Category: Automotive

No Decision Of Full Curfew In Mahboula , Farwaniya And Jleebshyoukh Yet No official instructions have been received yet by the Ministry of Interior to impose full curfew in Jleeb Al Shuyouk, Mahboula and Farwaniya, as claimed by some social media sites. News circulating t... April 06, 2020 0 5223 Category: Coronavirus

Visit Visa Violators Can Leave Country In Their Own Ticket; No Renewal Until Work Resumes The Administration of Residence Affairs Department will not renew visit or commercial visas until after the ministry resumes its work which is slated to begin on April 14 if the virus cases subside, r... April 05, 2020 0 4110 Category: Visit Visa
Popular Videos