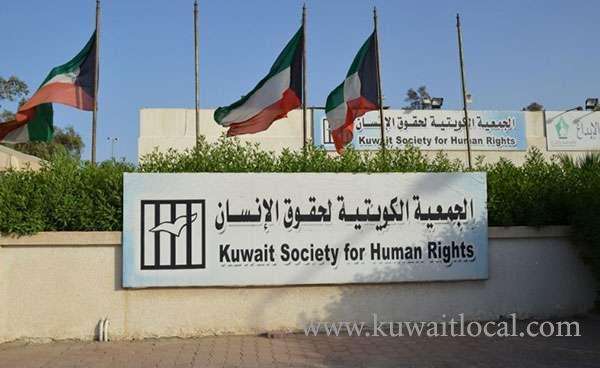 Since Kuwait Human Rights Society (KHRS) has announced its appointment of five lawyers to work permanently with the mandate to follow up complaints and cases submitted by migrant workers to the society, several legal experts and some diplomatic representatives have discussed the ‘Da’am’ (Support) project, reports Al-Rai daily

The project is being implemented by the society in cooperation with Swiss Agency for Development and Cooperation. The legal experts and diplomatic representatives applauded the achievements and progress of the project, particularly in monitoring issues and problems concerning migrant workers.

This came in a workshop organized by the society with 30 participants from various bodies to review their opinions on the third phase of the project. Board Chairperson of the society Khaled Al-Humeidi discussed the challenges that ‘Da’am’ is facing and ways to overcome them. “We provide services in four languages: Arabic, English, Indian and Urdu. Due to lack of manpower, many calls were unanswered. In the third phase of the project, the society will employ more manpower for every language through which legal services are provided”, Al-Humeidi affirmed.

Disclosed
Board member of the society Manal Bohaimed disclosed the “project is in partnership with Swiss Development Agency under the honorary sponsorship of Assistant Undersecretary at the Ministry of Social Affairs Hassan Kazem in collaboration with the Domestic Labor Department in the Interior Ministry.” Bohaimed said the project has been continuing for a year and its main objective is to protect the labor rights of migrant workers.

This is in addition to resolving violations, providing legal support, educating migrants on their rights, and encouraging the public to stand with them in dealing with issues. The project provides hotline services in cooperation with the Embassy of Ireland in Kuwait.

Meanwhile, Project Coordinator Abdul-Razzaq Al-Azaazi revealed they received 551 cases, 10 of them have been settled and these cases are related to returning passports held by sponsors. He added other cases are ongoing through legal experts and might have been referred to the court, while others are waiting for the hearing schedule. Al-Azaazi said personal aid was given to 446 foreign manpower (334 men and 112 women), while 5,504 calls were received through the hotline asking for legal advice and filing complaints; in addition to 201 consultation requests and 110 complaints received through online platforms.

In the meantime, Kuwait made another exceptional achievement added to Kuwait’s charitable record of humanitarian initiatives and donor conferences for many affected and suffering people, under the patronage of His Highness the Amir Sheikh Sabah Al-Ahmad Al-Jaber Al-Sabah. One of the initiatives was Kuwait hosting the 8th annual Conference for Effective Partnership and Information Sharing on “unified humanity against hunger.” Chairman of the International Islamic Charity Organization (IICO), Dr Abdullah Al-Maatouq said the 8th annual Conference for Effective Partnership and Information aims to unify humanitarian works in combating hunger around the world through the course of setting a marker of feeding one million hungry people in one year.

The conference patronized by His Highness the Amir Sheikh Sabah Al-Ahmad Al-Jaber Al-Sabah and attended by a number of representatives associations involved in humanitarian and charitable work in and outside Kuwait. He added the IICO seeks to promote efforts of combat hunger during the conference.

The organization will also invite participants to announce their commitment and implement their initiatives as an extension to the Washington Conference. The Washington Conference, entitled “Alliance of Virtue for the Common Good,” held in February, recommended in the closing statement launching a worldwide humanitarian campaign to feed one million people in societies that have been drastically affected by violent conflicts.

Al-Maatouq added that a commission will be assigned to follow up on pledges taken by the participants toward this cause, and quarterly reports will be published on social media. He also pointed out that this conference will attract many philanthropists, underlining alarming rise in hunger rates according to figures from international organizations, with the 2018 Hunger Map reports showing 821 million people not consuming enough food to satisfy their daily nutritional needs.

The Hunger Maps of 2018 reports also show 150 million children (under the age of 5) are not properly grown due to lack of nutrition, with one out of every three women of reproductive age suffering from anemia.

Responsibility
Al-Maatouq has made it clear that this is a vast responsibility undertaken by the international community and humanitarian organizations to alleviate the anguish of millions suffering by living under the “aggregate food security measures” as result of armed conflicts, climate change, drought and famine.

He also added the charitable organization has goals set up for the conference which aim for similar results in alleviating such suffering and creating the appropriate measures to make what is lacking much more readily available to whoever in need around the world. In 2010, the first Conference for Effective Partnership and Information Sharing for better humanitarian action was launched in Oman, and then the second to the sixth conferences was held in Kuwait, with the most recent, seventh one hosted by Bahrain.

For his part, Minister of Justice and Minister of Awqaf and Islamic Affairs Fahad Al-Afasi asserted on His Highness the Amir pioneering role in formulating Kuwait’s humanitarian system. Addressing an annual conference on effective partnership and exchange of information for better humanitarian work, the minister boasted that Kuwaiti charities are working with international partners to support humanitarian work in different world countries.

He stressed the significance of the gathering to serving humanity by means of launching an initiative aiming at feeding a billion hunger people around the globe, and unifying humanitarian efforts against this serious phenomenon.

The event, entitled: “One Humanity against Hunger”, is organized by the International Islamic Charitable Organization (IICO) under the aegis of His Highness the Amir. Kuwait is interested in promoting and supporting humanitarian issues and defending human dignity as well as helping the poor and disaster-affected people, he noted.

Kuwait is well-placed on the world map of humanitarian activities, he said, citing the honoring of His Highness the Amir as a Humanitarian Leader and Kuwait as a Humanitarian Center as clear-cut examples. GCC Secretary-General Abdul- Latif Al-Zayani, appreciated Kuwait’s international humanitarian achievements, which contributed to an effective partnership between the UN and Kuwaiti charities.

Gradual Implementation Of Total Curfew As Per Areas In Country Stringent measures have been enforced due to frequent increase in infection of coronavirus virus where marginal laborer are densely accommodated to contain the spread of infection. Sources stated t... April 01, 2020 0 7785 Category: Coronavirus

28 New Coronavirus Cases - 24 Indians And 2 Bangaldeshi Among Them - Total 317 Apr 1: The Kuwaiti Ministry of Health announced Wednesday that 28 people were infected by the novel coronavirus, in the last 24 hours. Total confirmed virus cases are 317 1 case Kuwaiti national... April 01, 2020 0 5021 Category: Coronavirus