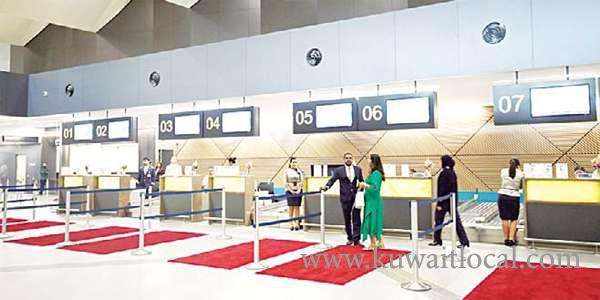 Kuwait Airways flights to other GCC countries will be through Terminal Four (T4) at the Kuwait International Airport starting from Sept 20, as part of the gradual opening according to the schedule of flights at the Directorate General of Civil Aviation (DGCA) and the airport, reports Al-Anba daily.

On the other hand, a DGCA official revealed the Ministry of Finance has approved a budget of KD 250,000 for the uniforms of employees at the Operations Department in the airport as per the request of the administration.

He also affirmed that the ban on Kuwait Airways flights imposed by the International Air Transport Association (IATA) was lifted after the modification and settling of a number of violations.

The association had earlier threatened not to facilitate Kuwait Airways flights to Europe for failure to comply with the International Civil Aviation Organization specifications. Meanwhile, Kuwait Airways announced Thursday receiving a decision from the European Aviation Safety Agency (EASA) to re-activate its maintenance license for European aircraft, which was suspended by the agency since last April 19th. “The decision to lift the suspension came after an inspection tour conducted by EASA on the main maintenance base at Kuwait International Airport and a number of external stations where the company performs aircraft maintenance services,” Yosif Al-Jassim, Kuwait Airways Chairman, said in a statement.

Al-Jassim added that the inspection tour conducted by EASA officials affirmed on Kuwait Airways’ commitment to implementing laws and decisions in regulating aircraft maintenance procedures and maintaining its safety. Al-Jassim also pointed out that all procedures, records of the company, its employees, and equipment were under scrutiny by the inspection agency.

Al-Jassim noted that the decision to lift the suspension in less than five months indicates the dedication of Kuwait Airways employees in their service, which would enable the company to maintain a high-ranking position, excellence, and its commitment to safety of its procedures. Al-Jassim stressed importance on Kuwait Airways keenness to implement all international maintenance requirements and safety of aircrafts, as well as keeping pace with the latest procedures to ensure the safety of aircrafts and operations.

What Is Coronavirus, How And Where It Started ? which countries effected in Middle East Kuwait 26|Bahrain 33|UAE 13|Oman 5 China's new coronavirus (Covid-19) is spreading quick. In excess of 81,000 individuals are known to be infected  and 2,700 deaths have been recorded. The greater part of cases and fataliti... February 26, 2020 0 1627 Category: Coronavirus

7 New Cases - Total 25 Confirmed Coronavirus Cases The Kuwaiti Ministry of Health on announced that the 7 more cases of coronavirus (COVID-19) reported in the country and the total number of confirmed cases reaches 25 so far. All the cases so far a... February 26, 2020 0 511 Category: Coronavirus

3 More Kuwaitis Infected With Coronavirus – Total Infection 8 So Far  Ministry of Health confirmed that three more Kuwaiti citizens have been infected with the new virus (Corona Kovid 19), bringing the number of confirmed cases of the virus in the country to 8 cas... February 25, 2020 0 430 Category: Coronavirus

Truth About Citizen Who Escaped Quarantine Sources denied that a citizen escaped from the quarantine reports Al Rai, explaining that the citizen was subject to the home quarantine as he is one of the returnees from Mashhad – Iran, and he... February 25, 2020 0 400 Category: Kuwait

Kuwaiti Citizen Coming From Iran Broke The Domestic Quarantine And Went To Work An employee at the Audit Bureau began his work last Sunday upon his return from Iran the previous day, even though he was subject to the home quarantine. Informed sources stated that the employee, ... February 25, 2020 0 398 Category: Kuwait