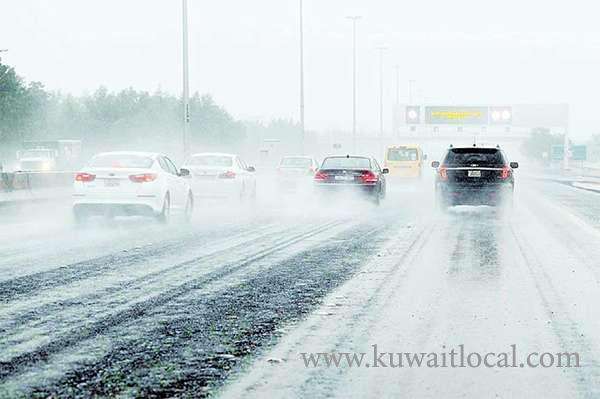 Kuwait Ports Authority (KPA) has suspended navigation at the three main ports of Shuwaikh, Doha and Shuaiba due to bad weather conditions and low visibility. Although cargo stevedoring operations were not affected by heavy rains, ship traffic has been halted at the main ports on a temporary basis, the authority said in a statement.

The authority’s Director-General Sheikh Yousuf Abdullah Al-Nasser Al-Sabah held a coordinative meeting on Tuesday evening to set out a precautionary plan in response to bad weather. Kuwait has been hit by unstable weather conditions involving rainstorms and lightning.

Earlier in the day, DGCA Chairman Sheikh Salman Al-Humoud Al-Sabah made an inspection tour of the airport facilities involving T1, T4 and T3. Al-Wagayan quoted Sheikh Salman as appreciating the efforts of all state agencies working at the airport in response to bad weather conditions. A wave of unstable weather conditions including rainstorms and lightning has been hitting Kuwait for a week.

Furthermore, Ministry of Public Works reiterated that all its equipment are spread around the country as a precautionary measure for any emergency. The ministry said in a statement that Minister of Public Works and State Minister of Municipality Affairs Hossam Al-Roumi is personally following up on work developments in presence of the ministry’s personnel. It added that all ministry’s and Roads Authority’s equipment as well as those of the ministry of defense and the National Guard are put on full alert in anticipation of any emergency that may arise due to the potential downpour.

Business Drop By 95%, Alshaya Has Prepared To Reduce Costs Several businesses in Kuwait have begun feeling the pinch as a result of the measures taken by the government to contain the spread of coronavirus. Kuwait once a thriving market for retail and travel ... April 02, 2020 0 13250 Category: Kuwait

Gradual Implementation Of Total Curfew As Per Areas In Country Stringent measures have been enforced due to frequent increase in infection of coronavirus virus where marginal laborer are densely accommodated to contain the spread of infection. Sources stated t... April 01, 2020 0 8139 Category: Coronavirus

Coronavirus Cases In Mahboula On The Rise,MOH Officials Warned Residents To Stay Home Ministry of Health officials have warned residents of Mahboula area to taken extra precautionary measures and not venture outside unless absolutely necessary. In a video that has gone viral, a ministr... March 30, 2020 0 6084 Category: Coronavirus

Total Ban Options On Government Table Today The possibility of enforcing a full curfew is among the  options on the agenda of the Council of Ministers in their meeting tonight, Al Rai newspaper disclosed that a high ranking government reve... March 31, 2020 0 5976 Category: Coronavirus

28 New Coronavirus Cases - 24 Indians And 2 Bangaldeshi Among Them - Total 317 Apr 1: The Kuwaiti Ministry of Health announced Wednesday that 28 people were infected by the novel coronavirus, in the last 24 hours. Total confirmed virus cases are 317 1 case Kuwaiti national... April 01, 2020 0 5162 Category: Coronavirus

Strict Curfew In Jleeb Al Shuyoukh Jleeb Al Shuyouk has come under the radar of the Ministry of Health who have begun taking rounds in the area to ensure precautionary measures are being followed to contain the spread of coronavirus. ... March 31, 2020 0 4418 Category: Automotive
Popular Videos