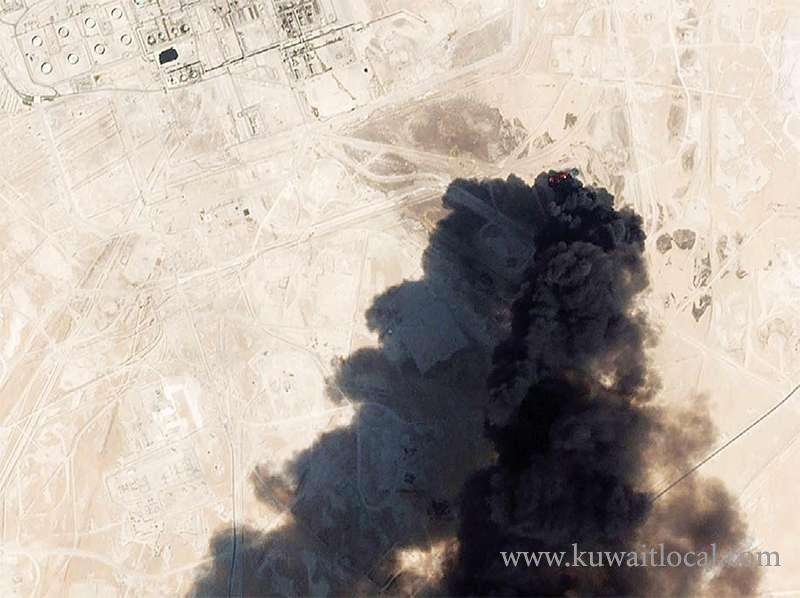 Kuwait is investigating the sighting of a drone over its territory and is coordinating with Saudi Arabia and other countries after Saturday’s attacks on Saudi oil plants, two Kuwaiti newspapers reported on Sunday.

This came in a phone call made to Saudi King Salman bin Abdulaziz, in which His Highness the Amir expressed his full support to Saudi Arabia and reiterated rejection to all kinds of terrorism. His Highness the Prime Minister Sheikh Jaber Mubarak Al-Hamad Al-Sabah has called for extra protection of strategic locations around the country, keeping in mind the wellbeing of citizens and residents alike.

The White House on Sunday did not rule out a potential meeting between US President Donald Trump and Iranian President Hassan Rouhani, even after Washington accused Iran of being behind drone attacks on Saudi oil facilities. White House adviser Kellyanne Conway said the attacks on Saturday “did not help” prospects for a meeting between the two leaders during the United Nations General Assembly this month but she left open the possibility it could happen. “I’ll allow the president (Trump) to announce a meeting or a non-meeting,” Conway told the “Fox News Sunday” program.

The Trump administration’s sanctions and “maximum pressure” campaign on Iran over its nuclear and ballistic missile program will continue whether or not the two leaders meet, she added. However, Conway said, “You’re not helping your case much,” by attacking Saudi Arabia, civilian areas and critical infrastructure that affects global energy markets. Iran has denied allegations made by US Secretary of State Mike Pompeo that it was behind the attacks on plants in the heartland of Saudi Arabia’s oil industry, including the world’s biggest petroleum processing facility. Yemen’s Iran-aligned Houthi group claimed responsibility for the attacks, which have cut Saudi oil output roughly in half. Pompeo said Iran was behind nearly 100 attacks on Saudi Arabia while leaders in Tehran “pretend to engage in diplomacy.”

Sunni Saudi Arabia and Shi’ite-led Iran back opposing factions across the Middle East, from Yemen and Syria to Lebanon and Iraq. Saudi Arabia is leading a military coalition to back Yemen’s internationally recognized government against the Houthis. Washington, a staunch ally of Riyadh, has adopted a tough anti-Iran “maximum pressure” policy to force Tehran to negotiate a broader deal that further curbs its nuclear program, restricts Tehran’s ballistic missile work and ends its support for regional proxy forces.

Attacks
Conway said the US Energy Department is prepared to tap into the Strategic Petroleum Reserve after the attacks on Saudi oil facilities if needed to stabilize the global energy supply. “We have energy under our feet and off our shores, and this president is leading the way to responsibly develop it so that when Iran attacks Saudi Arabia over 100 times, we are prepared to take action to protect our own interests,” she said.

Yemen’s Iran-aligned Houthi group claimed credit for the attacks on two plants at the heart of Saudi Arabia’s oil industry, including the world’s biggest petroleum processing facility. Pompeo, however, said on Twitter that there was no evidence the attacks came from Yemen. “Tehran is behind nearly 100 attacks on Saudi Arabia while Rouhani and Zarif pretend to engage in diplomacy,” Pompeo said, referring to Rouhani and Foreign Minister Mohammed Javad Zarif.

“Amid all the calls for de-escalation, Iran has now launched an unprecedented attack on the world’s energy supply,” he added. The State Department declined to provide any evidence to bolster Pompeo’s claim. “We call on all nations to publicly and unequivocally condemn Iran’s attacks,” Pompeo said, warning that the Trump administration would work with its allies to make sure Iran was “held accountable for its aggression.”

The tweets signaled a more hawkish stance in Washington towards Tehran, following signs of a possible thaw in relations between the two nations after months of escalation. Last year, Trump withdrew the United States from a 2015 pact that aimed to keep a lid on Tehran’s nuclear ambitions and he has imposed a series of sanctions that have crippled Iran’s economy. But in recent weeks, Trump has said he would be open to meeting with Rouhani, perhaps on the sidelines of the United National General Assembly in New York later this month.

Pompeo has said such talks could take place without any preconditions. Rouhani, for his part, has said that Tehran, which denies seeking nuclear weapons, would not talk to the United States until Washington lifts the sanctions. Republican Senator Lindsay Graham, a close Trump ally and a member of the Senate Foreign Relations Committee, said Saturday’s attacks showed Iran was not interested in peace and was instead pursuing nuclear weapons and regional dominance.

“It is now time for the US to put on the table an attack on Iranian oil refineries if they continue their provocations or increase nuclear enrichment,” Graham said on Twitter. Others cast doubt on Pompeo’s allegations. “This is such irresponsible simplification and it’s how we get into dumb wars,” Democratic Senator and committee member Chris Murphy tweeted. “Iran is backing the Houthis and has been a bad actor, but it’s just not as simple as Houthis=Iran.” Washington’s allies overseas will want to see solid evidence of Iran’s involvement, said Suzanne Maloney, a Middle East expert at the Brookings Institution think-tank in Washington. “It’s credible that the Iranians had something to do with this,” said Maloney.

“We’ll have to wait and see how they’ll (the administration) marshal the evidence.” Iran dismissed accusations by the United States that it was behind the attacks on the Saudi oil plants and warned on Sunday that US bases and aircraft carriers in the region were in range of its missiles.

Iranian Foreign Ministry Spokesman Abbas Mousavi, speaking on state TV, dismissed the US allegation as “pointless”. A senior Revolutionary Guards commander warned that the Islamic Republic was ready for “full-fl edged” war. “Everybody should know that all American bases and their aircraft carriers in a distance of up to 2,000 kms around Iran are within the range of our missiles,” the semiofficial Tasnim news agency quoted commander Amirali Hajizadeh as saying.

MoE Allows Travel Without Leave Permits For Resident Teachers, Staff The Ministry of Education (MoE) said Monday that resident teachers and ministry staff can travel back to their respective countries without needing a leave permit. According to the ministry’s tw... March 24, 2020 2 7524 Category: Kuwait

Full Curfiew Is An Available Option On Table MOH spokesperson Dr. Abdullah Al-Sanad says that issuing "Full Curfew" decision is an available option to limit the spread of the Novel #Coronavirus, but we hope that we do not reach to this... March 25, 2020 0 5376 Category: Coronavirus

Banks To Postpone Installment Premiums And Credit Card Payments Without Interest Kuwait banks have decided to postpone loan installments of Kuwaiti citizens and Small and Medium Enterprises (SMEs) for a period of six months and freezing of the interest payment during that time, Al... March 25, 2020 0 5035 Category: Coronavirus

COVID-19 Outbreak In Kuwait Under Control - Health Minister Minister of Health Sheikh Dr. Basel Al-Sabah has assured the novel coronavirus (COVID-19) outbreak in Kuwait is manageable. The ministry is monitoring on daily basis some cases of those who had con... March 24, 2020 0 3964 Category: Coronavirus

8 Deportees Among 350 Egyptians To Fly Tomorrow Sources at DGCA revealed that a second Egypt Air flight will carry 350 Egyptians to their country at 4pm on Wednesday, tomorrow. The sources stated that the scheduled flight will arrive tomorrow morni... March 24, 2020 0 3923 Category: Coronavirus

Kuwait Social Affairs Ministry Launches Donation Campaign The Kuwaiti Ministry of Social Affairs on Friday approved launching a campaign to raise donations on Saturday for fighting coronavirus. Up to 41 Kuwaiti charities will pariticpate in the campaign, pro... March 27, 2020 0 3608 Category: Coronavirus