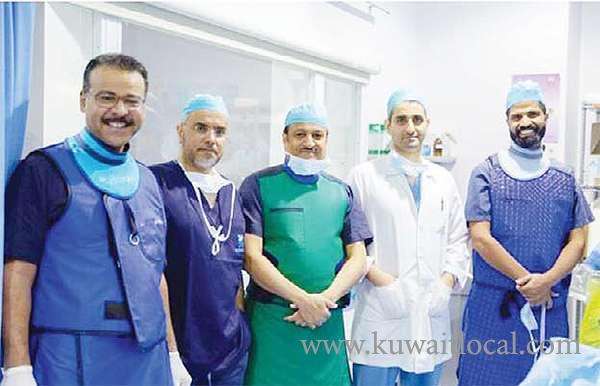 A Kuwaiti medical team from the Chest Hospital has revealed global results in the treatment of the aortic valve by catheterization (TAVI), which is the installation of valve through the catheter without the need for surgical intervention.

Dr Ibrahim Al-Rashdan, a member of the team, consultant on heart diseases and catheterization, told KUNA on Wednesday that thanks to accumulated experience, the Kuwaiti medical team at the Chest Hospital achieved great international results through conducting such operations.

He pointed out that the narrowness of the aortic valve is one of the most common heart disease, especially in the elderly who suffer from the disease which has several symptoms such as shortness of breath, chest pain and loss of consciousness. He said that the Kuwaiti medical team has conducted these operations very professionally without the need to use expertise from outside Kuwait or send patients abroad.

He pointed out that these operations were conducted previously through surgical intervention in the open heart operation to replace the Aortic valve with an artificial valve, noting that the process takes four hours and the patient needs to stay in the hospital for a period of not less than a week and need for a rest period of more than a month, whereas the TAVI operation only takes less than half an hour.

Conducts
For his part, consultant of cardiac catheterization and head of the catheterization unit at the Chest Hospital Dr Khalid Al-Marri said in a similar statement to (KUNA) that the medical team conducts four TAVI operations weekly and this is one of the highest in the region.

Al-Marri pointed out that the process is done by inserting the artificial valve into the patient’s body through the artery located in the thigh after giving anesthesia to the area to avoid pain to the patient until it reaches the narrow Aortic valve and install it.

Al-Marri said that all patients are followed periodically under a rigorous research protocol to ensure success of the results of the catheter and compare them with the global results, indicating that long-term results match the results of the world centers if not surpass them.

“The new treatment has greatly contributed to the treatment of many of the previously difficult conditions, since the patients are not fit to carry open heart surgery,” said team member Dr Khalid Bursali, and head of the ultrasound unit. He added that the results and figures of the treatment of aortic valve through the catheter (TAVI) in the Chest Hospital have become comparable to the results of global centers, indicating that the work of the Kuwaiti medical team is not limited to this procedure, but includes training and education of doctors inside and outside Kuwait

Labour Camp In Mahboula Quarantined After Technician Tested Positive Covid19 A labour camp in Mahboula area housing almost 600 workers has been quarantined informed sources told The Times, Kuwait On discovery that one Indian technician who was staying at the camp was tested CO... March 28, 2020 0 7083 Category: Automotive

Coronavirus Cases In Mahboula On The Rise,MOH Officials Warned Residents To Stay Home Ministry of Health officials have warned residents of Mahboula area to taken extra precautionary measures and not venture outside unless absolutely necessary. In a video that has gone viral, a ministr... March 30, 2020 0 5708 Category: Coronavirus

Total Ban Options On Government Table Today The possibility of enforcing a full curfew is among the  options on the agenda of the Council of Ministers in their meeting tonight, Al Rai newspaper disclosed that a high ranking government reve... March 31, 2020 0 4950 Category: Coronavirus

7 Indians Infected From Contact With Confirmed Coronavirus Case The Kuwaiti Ministry of Health announced Monday that 11 people were infected by the novel coronavirus, known as COVID-19, in the last 24 hours. With this, the total number of Indians confirmed with co... March 30, 2020 0 4672 Category: Coronavirus

Strict Curfew In Jleeb Al Shuyoukh Jleeb Al Shuyouk has come under the radar of the Ministry of Health who have begun taking rounds in the area to ensure precautionary measures are being followed to contain the spread of coronavirus. ... March 31, 2020 0 4179 Category: Automotive

Gulf Bank Postpones Loans And Credit Card Installments Gulf Bank will postpone all installments of consumer loans and credit cards for six months for all Gulf Bank customers. Moreover, all interest and fees related to these transactions will be waived. Th... March 29, 2020 0 4133 Category: Coronavirus

9 Indians And 3 Bangladeshi Among 20 New Coronavirus Infected Persons The Kuwaiti Ministry of Health announced on Sunday that a further 20 people were infected by the novel coronavirus, known as COVID-19, in the last 24 hours. This brings the Gulf country’s tally ... March 29, 2020 0 3852 Category: Coronavirus

35 Indians among 289 Confirmed Covid19 Cases in Kuwait Ministry of Health today announced that 23 new cases of Coronavirus were confirmed in Kuwait in the last 24 hours. With this, the total number of confirmed cases raises to 289 in the country. 8 of ... March 31, 2020 0 3819 Category: Coronavirus
Popular Videos