Let It Be Rotted - Fish Campaign Is Success
Category: Kuwait 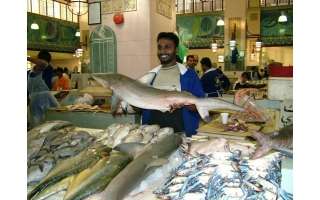 The campaign titled ‘Let it be spoiled’, which was launched to urge the public to boycott purchasing fish because of the unreasonable hike in the fish prices recently, has succeeded in achieving its objectives.

A tour of the fish market revealed an obvious reduction in the number of buyers, which forced the fishmongers to reduce the prices of some kinds of fish. Due to its success, such a campaign could pave way for similar steps to be taken by the public with the aim of persuading the government to control prices.

Economic experts pointed out the inability of Minister of Commerce and Industry Yousef Al-Ali in shouldering his responsibility of controlling the prices of commodities, which could force citizens to launch such campaigns to protest against the price hikes of other products particularly meat, construction materials and all consumer commodities, in a manner that could be considered as a revolution against very high prices of commodities. The first positive result of the campaign was seen when the price of Zubaidi fish dropped from KD 15 per kilogram to less than KD 5. There are expectations that the prices will reduce further on Sunday in order to avoid losses. Even though the daily tried to contact the minister Dr Yousef Al-Ali several times in order to obtain a clarification on the ministry’s stance in this regard, it did not receive any response.

However, according to sources, the minister affirmed that the ministry played its role in the hike of the fish prices. The campaign was criticized for aiming to promote imported fish at the expense of the local fish and that it resulted from the conflict among the traders. They said the minister is convinced that the hike in the prices of fish is normal as it varies based on the season and the supply-and-demand, affirming that the ministry will not take any procedure in this regard except if it discovers any monopoly in the trade. In the same context, a number of lawmakers supported the campaign and held the ministry responsible for the unreasonable hike in the prices of fish. MP Nabeel Al-Fadhel demanded to know the ministry’s stance regarding the unprecedented hike in the prices.

In his Twitter account, he insisted that people deserve an explanation if the price hike is justified, asking, “What role is the Consumer Protection Department playing in this regard?” Al-Fadhel urged employees of Ministry of Commerce and Industry to withdraw the licenses of stalls belonging to greedy fishmongers, indicating that the nation somehow managed to protect itself from the greed of the fish traders. He added, “I think it is not just the fish that is spoiled. Even the Consumer Protection Department is also decayed”.

Meanwhile, MP Dr Yousef Al-Zalzalah affirmed that the hike in fish prices is proof of the greed of some individuals who are interested in collecting wealth at the expense of the people of Kuwait. He expressed his resentment over the government’s ignorance regarding such an issue, adding that the Consumer Protection Department must perform a bigger role besides closing the shops of greedy sellers; it must allow import of fish to control monopoly in the trade. Furthermore, MP Dr Mohammad Al- Huwaila urged Minister of Commerce and Industry Yousef Al-Ali to activate consumer protection, insisting that what is happening now has become a recurring experience that is hitting hard on citizens, especially low income earners whose pockets are drying up.

He declared that there are no justifications for the skyrocketing prices of fish because they are relatively high compared to neighboring countries. Insisting that the ministry should relieve consumers of the traders’ greed, Al-Huwaila decried the situation whereby people have spent so much on summer vacation and are worrying about how to pay the school fees for the new semester and manage the Eid Al-Adha expenses along with the hike in the fish prices. Also, MP Abdullah Al-Adwani said the government should be responsible for stopping the unjustified inflation, affirming that the failure of the concerned authorities in monitoring the market activities led to the current situation which has caused low income earners to suffer unnecessarily. He admonished the minister to control the prices and order the concerned departments especially the Consumer Protection Department to apply the law on the violators.

Meanwhile, MP Faisal Al-Kanderi urged the minister to act quickly in activating laws for protecting consumers and stop being ignorant while people are calling for boycott against purchasing fish. He indicated that people have realized the ministry is not taking proactive steps in curbing traders from playing with prices. Also, MP Mansour Al-Dhufairi said he is in support of the campaign to boycott fish, adding that the crazy hike in fish prices indicates the absence of effective monitoring of the market.

In addition, several activists and bloggers criticized Minister of Commerce and Industry Yousef Al-Ali and held him responsible for the failure of the concerned authorities in controlling prices. They challenged the minister to reveal the procedures that his ministry embarks on for countering the price hike, especially since his salary is paid from the common wealth of the same citizens who are suffering from the inflation.

Visit Visa Transfer To Family Visa I bought my family (wife & 18 month-year-old baby) through visit visa to Kuwait. Please let me know, can I change visit visa to dependent without leaving country? If it possible, what are the docu... January 18, 2020 1 477 Category: Visit Visa 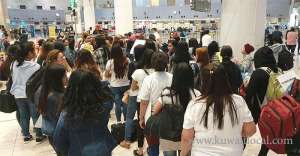