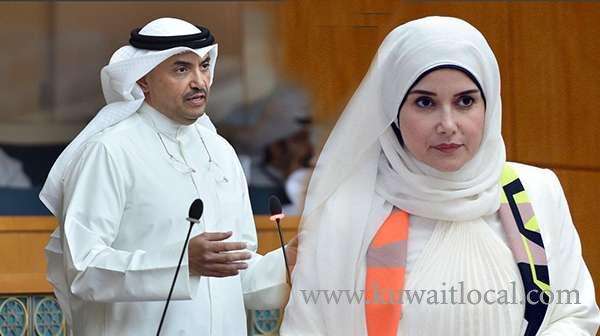 MP Mohammad Al- Mutair has hinted on submitting an interpellation motion against HH the Prime Minister Sheikh Jaber Al-Mubarak Al-Hamad Al-Sabah despite the instruction of His Highness the Amir Sheikh Sabah Al-Ahmad Al-Jaber Al- Sabah to refrain from taking such a step if the grilling points are beyond the jurisdiction of the premier.

Earlier, the National Assembly agreed to refer the grilling motion submitted by MP Shu’aib Al- Muwaizri against HH the Prime Minister to the Legal and Legislative Affairs Committee for review in order to determine its constitutionality.

Al-Mutair urged Sheikh Jaber Al-Mubarak to immediately dismiss State Minister for Housing and Services Jinan Boushehri for her failure to deal with the flood crisis, labor demonstrations in Al-Mutla’a and delayed operation of the new terminal building (T4) at Kuwait International Airport; implying that an interpellation will be underway if his demand is not addressed.

In response, Boushehri pointed out that if the MP is adamant on using his constitutional tools, it should be done in accordance with Article 101 of the Constitution; hence, the interpellation must be against Boushehri, not the premier.

Talking about the issues raised by the MP, Boushehri affirmed major maintenance works are underway to repair damages caused by the fl ood, especially in Sabah Al-Ahmad Housing City. She said all concerned contracts are under investigations, even those terminated before she assumed the post.

Business Drop By 95%, Alshaya Has Prepared To Reduce Costs Several businesses in Kuwait have begun feeling the pinch as a result of the measures taken by the government to contain the spread of coronavirus. Kuwait once a thriving market for retail and travel ... April 02, 2020 0 13174 Category: Kuwait

Gradual Implementation Of Total Curfew As Per Areas In Country Stringent measures have been enforced due to frequent increase in infection of coronavirus virus where marginal laborer are densely accommodated to contain the spread of infection. Sources stated t... April 01, 2020 0 8130 Category: Coronavirus

Coronavirus Cases In Mahboula On The Rise,MOH Officials Warned Residents To Stay Home Ministry of Health officials have warned residents of Mahboula area to taken extra precautionary measures and not venture outside unless absolutely necessary. In a video that has gone viral, a ministr... March 30, 2020 0 6078 Category: Coronavirus

Total Ban Options On Government Table Today The possibility of enforcing a full curfew is among the  options on the agenda of the Council of Ministers in their meeting tonight, Al Rai newspaper disclosed that a high ranking government reve... March 31, 2020 0 5970 Category: Coronavirus

28 New Coronavirus Cases - 24 Indians And 2 Bangaldeshi Among Them - Total 317 Apr 1: The Kuwaiti Ministry of Health announced Wednesday that 28 people were infected by the novel coronavirus, in the last 24 hours. Total confirmed virus cases are 317 1 case Kuwaiti national... April 01, 2020 0 5159 Category: Coronavirus

7 Indians Infected From Contact With Confirmed Coronavirus Case The Kuwaiti Ministry of Health announced Monday that 11 people were infected by the novel coronavirus, known as COVID-19, in the last 24 hours. With this, the total number of Indians confirmed with co... March 30, 2020 0 4816 Category: Coronavirus

Strict Curfew In Jleeb Al Shuyoukh Jleeb Al Shuyouk has come under the radar of the Ministry of Health who have begun taking rounds in the area to ensure precautionary measures are being followed to contain the spread of coronavirus. ... March 31, 2020 0 4413 Category: Automotive
Popular Videos