Advanced Search
MP Presented A Proposal To Add One Paragraph To Article 21 On The Residence Of Foreigners
Category: Kuwait 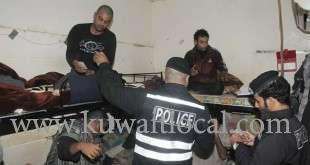 MP Askar Al-Anazi has presented a proposal to add one paragraph to Article 21 of Amiri Decree number 17/1959 on the residence of foreigners. Article one of the bill stipulates adding a paragraph to the above mentioned decree to read as follows: “A person who harbors a runaway expatriate household worker shall bear the expenses for the latter’s repatriation without prejudice to the rights of the sponsor.”

In the explanatory note of the bill, the lawmaker pointed out that in 1959, Amiri Decree number 17/1959 was promulgated to regulate residency of foreigners; stipulating rules, terms and conditions concerning their stay in the country.

He explained the rising number of household workers escaping from their sponsors to work for others contradicts the decree and it negatively affects sponsors who incur losses particularly since they bear the recruitment and residency costs.

He revealed the bill aims to protect the rights of the sponsors of runaway household workers and for those harboring these workers to bear the repatriation costs without depriving the original sponsors of their rights.

On the other hand, a source quoted Board Chairman of Al-Dura Domestic Workers Recruitment Company Eyad Al-Sumait as saying that the company will take care of all recruitment procedures and refer maids to sponsors at competitive prices. He added the headquarters of the company, which will open in September, will be located in Al-Awadhi Tower along Ahmad Al-Jaber Street, Kuwait City and branches will be opened in cooperative societies to ease procedures for those planning to hire household workers.

He affirmed the company will work hard to reduce the price by half of the current price to be not more than KD 500 to KD 600, depending on the availability of workers and the countries sending domestic helpers to Kuwait. He said the company is obliged to ensure the safety of recruited domestic workers and that they are free from diseases before coming to Kuwait by requiring them to undergo tests in medical centers accredited by the Ministry of Health in their countries of origin.

All Employees To Receive Full Salary Of April Month Without Any Deduction Citizens and expatriates will receive their full salaries in April without any loan deduction or other consumer installments, reports Al-Anba daily. The April salaries will be paid before the holy mon... April 05, 2020 1 14552 Category: General

Legal Action Against Sponsors Encouraging Workers To Leave Mahboula Area Kuwait Ministry of Interior (MoI) stopped expatriate workers from leaving Mahboula Area, south of Kuwait City, as instructed by their sponsors and ordered them to return to their homes, the ministry s... April 06, 2020 0 11351 Category: Coronavirus

Secretary Working in KOC Tested Positive for Coronavirus (Covid 19) An Indian secretary working for a contracting company for Kuwait Oil Company was found infected with coronavirus, Al Rai reported today. The paper said that 12 cases of contact with the secretary were... April 07, 2020 0 7117 Category: Coronavirus

Locck Down Jleeb & Mahboula and Curfew Time Extended The council of Ministers, in its extra ordinary cabinet meeting today decided to extend the curfew hours until six in the morning. The curfew will be from 5:00 pm till next day morning 6:00 am In a... April 06, 2020 0 7110 Category: Coronavirus

Legal Measures Will Be Taken Immediately On Housing Bachelors In Residential Areas The Minister of State for Municipal Affairs, Eng. Walid Al-Jasim, has state that he has directed concerned departments in the municipality to receive complaints by WhatsApp 24727732 about housing bach... April 07, 2020 0 5668 Category: Automotive

No Decision Of Full Curfew In Mahboula , Farwaniya And Jleebshyoukh Yet No official instructions have been received yet by the Ministry of Interior to impose full curfew in Jleeb Al Shuyouk, Mahboula and Farwaniya, as claimed by some social media sites. News circulating t... April 06, 2020 0 5228 Category: Coronavirus

Curfew Extension And Area Wise Curfew Discussed In A Meeting Extending curfew hours as well as imposing area wise curfew, especially in areas with dense population of expatriates were among the several issues discussed by the ministerial committee in their meet... April 05, 2020 0 5058 Category: Coronavirus

Visit Visa Violators Can Leave Country In Their Own Ticket; No Renewal Until Work Resumes The Administration of Residence Affairs Department will not renew visit or commercial visas until after the ministry resumes its work which is slated to begin on April 14 if the virus cases subside, r... April 05, 2020 0 4115 Category: Visit Visa
Popular Videos