Advanced Search
MPs Have Rejected The Decision On Retirement After 30 Years
Category: Kuwait 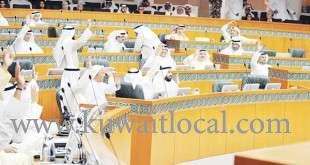 A number of MPs have rejected the decision of the Council of Ministers to oblige ministries to refer for retirement all employees who have been in service for more than 30 years, asserting this decision is arbitrary because citizens who are still able and willing to work are being forced to retire.

The lawmakers consider this decision a manifestation of the failure of the State to generate employment opportunities, calling for the issuance of related legislation or amendment of Civil Service Law number 15/1979 to prevent the government from forcing employees to retire.

They urged the ministries and Civil Service Commission (CSC) to give employees a grace period before retirement.

MP Adnan Abdul-Samad stressed the need to reconsider the early retirement scheme, particularly since there is a justifiable and logical demand to treat citizens like some expatriates who have been allowed to work beyond the legal retirement age.

He argued compulsory retirement is unjustified and has been proven to be futile as it happened in the Ministry of Education which referred many instructors and employees for retirement only to rehire them again due to shortage of manpower after implementing the decision.

MP Khalil Saleh voiced objection to mandatory retirement, stressing the need to amend the article that gives ministers the right to refer employees for compulsory retirement. He said he presented a proposal to amend the law such that no employee shall be referred for retirement until he reaches the legal age of retirement, unless there is a valid reason like referral to investigation and other legal proceedings.

MP Hamdan Al-Azmi wondered why citizens must be forced to leave their work place before reaching the legal retirement age while some expatriates are allowed to work for many years after reaching the retirement age. He emphasized the need to amend the law to protect employees who should not be left under the whims of officials.

MP Adel Al-Damkhi regards the mandatory retirement program as fl awed as it is implemented without warning, which is detrimental to employees since most of them have financial obligations. He said compulsory retirement must not be utilized as a form of punishment for employees.

MP Khalid Al-Shatti stressed that citizens should be given the opportunity to work until they reach the legal retirement age. He said citizens who have the ability and are willing to continue working must be allowed to do so.

Coronavirus Cases In Mahboula On The Rise,MOH Officials Warned Residents To Stay Home Ministry of Health officials have warned residents of Mahboula area to taken extra precautionary measures and not venture outside unless absolutely necessary. In a video that has gone viral, a ministr... March 30, 2020 0 5602 Category: Coronavirus

7 Indians Infected From Contact With Confirmed Coronavirus Case The Kuwaiti Ministry of Health announced Monday that 11 people were infected by the novel coronavirus, known as COVID-19, in the last 24 hours. With this, the total number of Indians confirmed with co... March 30, 2020 0 4627 Category: Coronavirus

Gulf Bank Postpones Loans And Credit Card Installments Gulf Bank will postpone all installments of consumer loans and credit cards for six months for all Gulf Bank customers. Moreover, all interest and fees related to these transactions will be waived. Th... March 29, 2020 0 4044 Category: Coronavirus

Strict Curfew In Jleeb Al Shuyoukh Jleeb Al Shuyouk has come under the radar of the Ministry of Health who have begun taking rounds in the area to ensure precautionary measures are being followed to contain the spread of coronavirus. ... March 31, 2020 0 4015 Category: Automotive