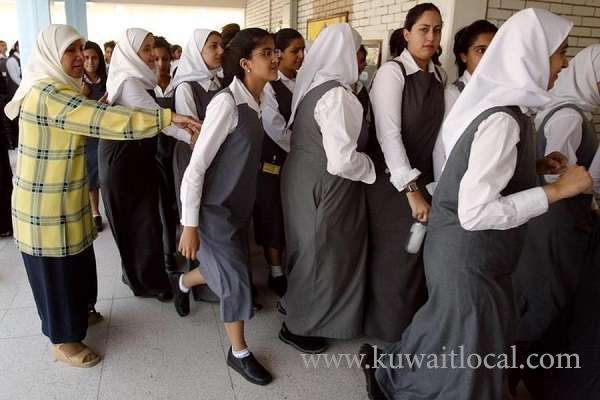 Education authorities in Kuwait are scurrying to explore options after 77 of the Palestinian teachers they had selected to work in Kuwaiti schools have turned down the ministry’s contracts, saying the salary was almost half of their expectations.

Kuwait had planned to hire 180 teachers for the next academic year and a delegation from the education ministry travelled to Palestine where it conducted tests and interviews to choose the successful applicants from a list of 1,173 teachers, including 425 women.

Following the final selection, the ministry was able to recruit only 103 after the others said they would not agree to work for a monthly salary of 480 Kuwaiti dinars, well below the KD800 they had expected to receive, Kuwaiti daily Al Seyassah reported. The Palestinians who accepted the contracts will be teaching maths, physics, chemistry, biology and geology.

The recruitment was the first after Kuwait last year lifted a 26-year ban on hiring Palestinian teachers.

Palestinian teachers made remarkable contributions to the development of education in Kuwait, mainly in the 1960s during the early days of the nation-building process.

However, their status plummeted in 1990 in the wake of a deep Kuwaiti-Palestinian rift following the invasion of Kuwait by Iraqi leader Saddam Hussain, which was supported by Palestinian leaders.

Kuwaitis felt betrayed by pro-Saddam attitude of the Palestinians and following its liberation in February 1991, Kuwait cut off ties with the PLO, froze its financial backing and expelled a large number of Palestinians from the country.

The bilateral relations started to improve in December 2004 when Palestinian President Mahmoud Abbas apologised for the Palestinian position on Iraqi invasion of Kuwait.

Relations have since evolved and Kuwait repeatedly announced multimillion dollar donations for development projects in Palestine.

In April 2016, Kuwait’s education ministry said that it would be recruiting hundreds of Palestinians to teach mathematics and science in its schools. The teachers will be hired from Palestine or locally from the Palestinian community in Kuwait, it added.

However, as the education ministry announced its decision to end the hiatus, the interior ministry said that the Palestinian passport was not enough to grant them the residence permit that will allow them to stay and work in the country.

The legal hurdle was cleared one month later after the ministry said it would request Palestinians to present their passports as well as their laissez-passers when they apply for the residency permits.

“We need the laissez-passer because it allows us to deport the expatriate home in case he breaks the laws of Kuwait,” a ministry official said. “It is the guarantee that we need as a security department so that we do not face the issues we faced when dealing with Palestinians carrying Syrian, Jordanian or Egyptians documents, who were not accepted back on deportation by the countries that gave them the documents.”

But as Palestinians will be back in Kuwaiti classrooms, a lawmaker has called for replacing expatriate teachers with Kuwaiti nationals in a bid to reduce the number of foreigners in the country. Osama Al Shaheen said there was an urgent need to address the demographic imbalance and suggested that removing foreign teachers would contribute to it.

“The number of foreigners in Kuwait, according to the figures released in April is 3,064,193, and they represent 69 percent of the total population,” he said.

“The figures indicate that the country has 71,014 teachers out of which 46,079 are Kuwaiti nationals. It means that there are 24,935 Arab and foreign teachers which can be replaced by Kuwaiti men and women,” the lawmaker said at a press conference on Tuesday.

All Employees To Receive Full Salary Of April Month Without Any Deduction Citizens and expatriates will receive their full salaries in April without any loan deduction or other consumer installments, reports Al-Anba daily. The April salaries will be paid before the holy mon... April 05, 2020 1 14968 Category: General

Legal Action Against Sponsors Encouraging Workers To Leave Mahboula Area Kuwait Ministry of Interior (MoI) stopped expatriate workers from leaving Mahboula Area, south of Kuwait City, as instructed by their sponsors and ordered them to return to their homes, the ministry s... April 06, 2020 0 11900 Category: Coronavirus

Secretary Working in KOC Tested Positive for Coronavirus (Covid 19) An Indian secretary working for a contracting company for Kuwait Oil Company was found infected with coronavirus, Al Rai reported today. The paper said that 12 cases of contact with the secretary were... April 07, 2020 0 7595 Category: Coronavirus

Lockdown Jleeb & Mahboula and Curfew Time Extended The council of Ministers, in its extra ordinary cabinet meeting today decided to extend the curfew hours until six in the morning. The curfew will be from 5:00 pm till next day morning 6:00 am In a... April 06, 2020 0 7276 Category: Coronavirus

Legal Measures Will Be Taken Immediately On Housing Bachelors In Residential Areas The Minister of State for Municipal Affairs, Eng. Walid Al-Jasim, has state that he has directed concerned departments in the municipality to receive complaints by WhatsApp 24727732 about housing bach... April 07, 2020 0 6472 Category: Automotive

No Decision Of Full Curfew In Mahboula , Farwaniya And Jleeb Shyoukh Yet No official instructions have been received yet by the Ministry of Interior to impose full curfew in Jleeb Al Shuyouk, Mahboula and Farwaniya, as claimed by some social media sites. News circulating t... April 06, 2020 0 5273 Category: Coronavirus