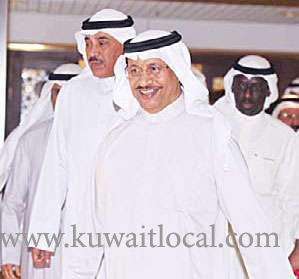 He affirmed the Parliament agreed to discuss the two interpellation requests against the prime minister behind closed doors in response to the request of the government, indicating the discussion ended without any vote of no-confidence due to failure to meet the required number of signatures.

In a cable to the prime minister, Sheikh Nawaf said, “I am pleased to address to Your Highness the warmest felicitation for the precious confidence affirmed by the respectable National Assembly as stipulated in the Constitution.” He expressed well-wishes to the premier in the process of reforms and full-scale development. He hopes the premier will succeed in attaining prosperity for the country and its people as desired by HH the Amir — the leader of humanitarian activities.

Meanwhile, MP Waleed Al-Tabtabaei, one of the proponents of a grilling motion against the premier, claimed there was a conspiracy to discuss the interpellations secretly; thereby, preventing the people from following up what he considers the strongest grilling in the history of the country. He said this happened to avoid putting pressure on the MPs to sign a non-cooperation motion.

After discussing the grilling motions against the premier, the Parliament tackled the interpellation against State Minister for Housing Affairs and Services Yaser Abul with the following points:

■ Failure to hold accountable the companies which committed grave errors in constructing government houses in the northwestern part of Sulaibikhat, Jaber Al-Ahmad and Sabah Al-Ahmad, violation of laws on the housing projects in Metlaa and Khairan, and making citizens bear the cost for repairing damages caused by the mistakes of these companies.

■ Violation of law numbers 47/1993 and 50/2010 amending some provisions of law number 44/1993 on housing care and establishment of stock companies to implement Metlaa and Khairan residential city projects.

■ The Public Authority for Housing Welfare’s decision to make changes in the contract — from North Metlaa to South Metlaa — without taking into consideration the technical and geographical differences.

■ Misleading information presented to lawmakers during discussion of the housing issue on April 26, 2017 as the minister’s responses contradicted contents of the questions forwarded to him. MPs Ali Al-Daqbasi and Abdullah Al-Fahad spoke in support of the grilling motion while MPs Rakan Al-Nisf and Auda Al-Ruwaiei spoke against. The discussion ended without a noconfidence motion against the minister and the speaker adjourned the session until May 23, 2017. HH the Amir also sent a cable to Abul on Thursday, congratulating him for responding to the grilling points. He extolled the minister and MPs for their participation in the session which he described as a procedure that exemplified real democracy. He then wished the entire nation continuous development and prosperity.

All Employees To Receive Full Salary Of April Month Without Any Deduction Citizens and expatriates will receive their full salaries in April without any loan deduction or other consumer installments, reports Al-Anba daily. The April salaries will be paid before the holy mon... April 05, 2020 1 14552 Category: General

Legal Action Against Sponsors Encouraging Workers To Leave Mahboula Area Kuwait Ministry of Interior (MoI) stopped expatriate workers from leaving Mahboula Area, south of Kuwait City, as instructed by their sponsors and ordered them to return to their homes, the ministry s... April 06, 2020 0 11347 Category: Coronavirus

Secretary Working in KOC Tested Positive for Coronavirus (Covid 19) An Indian secretary working for a contracting company for Kuwait Oil Company was found infected with coronavirus, Al Rai reported today. The paper said that 12 cases of contact with the secretary were... April 07, 2020 0 7112 Category: Coronavirus

Locck Down Jleeb & Mahboula and Curfew Time Extended The council of Ministers, in its extra ordinary cabinet meeting today decided to extend the curfew hours until six in the morning. The curfew will be from 5:00 pm till next day morning 6:00 am In a... April 06, 2020 0 7110 Category: Coronavirus

Legal Measures Will Be Taken Immediately On Housing Bachelors In Residential Areas The Minister of State for Municipal Affairs, Eng. Walid Al-Jasim, has state that he has directed concerned departments in the municipality to receive complaints by WhatsApp 24727732 about housing bach... April 07, 2020 0 5660 Category: Automotive

No Decision Of Full Curfew In Mahboula , Farwaniya And Jleebshyoukh Yet No official instructions have been received yet by the Ministry of Interior to impose full curfew in Jleeb Al Shuyouk, Mahboula and Farwaniya, as claimed by some social media sites. News circulating t... April 06, 2020 0 5227 Category: Coronavirus

Curfew Extension And Area Wise Curfew Discussed In A Meeting Extending curfew hours as well as imposing area wise curfew, especially in areas with dense population of expatriates were among the several issues discussed by the ministerial committee in their meet... April 05, 2020 0 5058 Category: Coronavirus

Visit Visa Violators Can Leave Country In Their Own Ticket; No Renewal Until Work Resumes The Administration of Residence Affairs Department will not renew visit or commercial visas until after the ministry resumes its work which is slated to begin on April 14 if the virus cases subside, r... April 05, 2020 0 4115 Category: Visit Visa
Popular Videos