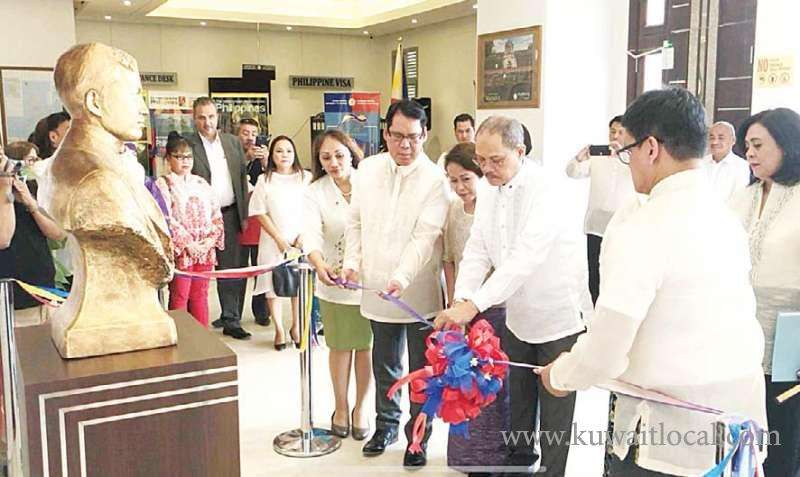 The Philippine Embassy in Kuwait led by Charge d’ Affaires Mohd Noordin Pendosina Lomondot marked on Wednesday the 121st Philippine Independence Day with a flag hoisting ceremony at the embassy premises followed by a brief programme.

Lomondot welcomed all the leaders and members of various Filipino organisations during the event under the theme “Tapang ng Bayan, Malasakit sa Mamamayan,” (Courage of the Nation, Compassion for the People) as he read out the message of Philippine President Rodrigo Roa Duterte.

Finally, Social Welfare Attache Vicky Navida conveyed the message of Department of Social Welfare and Development Secretary Rolando Bautista. The reading of messages was followed by some intermission numbers from singing Champs Maroel Guarin and Charvin Molaco of the Infinity Events Management as well as song numbers from some embassy staff. On the same occasion, Lomondot inaugurated the Sentro Rizal that aims to promote Philippine arts, culture and language, especially among children of overseas Filipinos.

Established in line with Republic Act 10066 or the National Cultural Heritage Act of 2009, the Sentro Rizal in Kuwait will feature a Filipiniana library and an exhibition hall. Under the law, the centre will serve as repository of Philippine arts, culture and language, including books, digital video discs, compact discs, films, magazines, artworks, tourism promotion materials and information materials.

Visit Visa Transfer To Family Visa I bought my family (wife & 18 month-year-old baby) through visit visa to Kuwait. Please let me know, can I change visit visa to dependent without leaving country? If it possible, what are the docu... January 18, 2020 1 1832 Category: Visit Visa

No Need For Doctors To Sign Or Put Their Stamp On Sick Leave The Ministry of Health, has activated from today, Jan 15, 2020, the electronic sick leave system in all health areas, hospitals and specialized health centers, reports Al-Anba daily. The Ministry o... January 16, 2020 0 865 Category: Kuwait

‘Cold Wave To Continue Through The Week, Temp To Hit 3°C, Frost Formation Expected’ Kuwait Meteorological Department has announced that the country will witness a significant decrease in the minimum temperatures to less than 3 degrees Celsius, resulting in frost formation in agricult... January 15, 2020 1 770 Category: Weather in Kuwait

Jleeb Misery Due To The Increasing Number Of Bachelor Tenants In Their Neighborhood MP Osama Al-Shaheen submitted a proposal regarding the fourth constructional plan of the State which will be conducted by the Municipal Council in April 2020. He suggested including Salmiya and Jleeb ... January 15, 2020 0 613 Category: Kuwait

Philippines Ban On New Recruitment To Stay Until Conditions Are Met The Presidential Palace in the Philippines announced today, Thursday, that the total ban on sending new Filipino workers to Kuwait has been formally activated, and he addressed a letter to the governm... January 18, 2020 0 609 Category: Filipinos

Threats To Families Of US Soldiers In Kuwait – Leave The Middle East The US Army’s 1st brigade combat division, stationed in Kuwait, sent a warning to family members of its paratroopers, calling on them to verify “secure and double check the status of their... January 18, 2020 1 302 Category: Kuwait

Philippines Official Statement About The Ban On Sending Labor To Kuwait Philippine official statements about the ban on sending domestic workers to Kuwait conflict were conflicting. While a partial ban was imposed on the sending of labor, Philippine Presidential Communica... January 14, 2020 0 215 Category: Kuwait