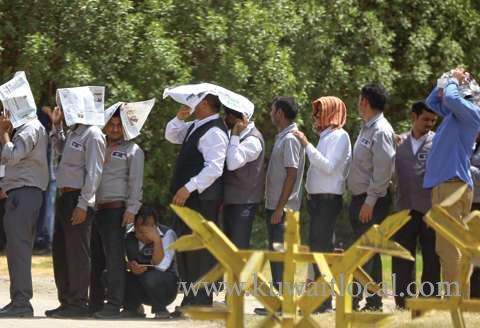 Kuwait is planning to set up a national committee for the organization and management of the demographic structure to implement a road map to reduce the number of expatriates by at least 1.5 million over the next seven years. The committee will work towards with an aim to implement plans to make Kuwaitis 50 percent of the population, with expatriates not exceeding that number.

The number of expatriates now is just over 3.244 million and Kuwaitis around 1.4 million, based on figures published by the Public Authority for Civil Information (PACI).

According to report, if this equation is to materialize, the number of expats must be reduced by a minimum of 1.5 million without even considering natural growth and any future recruitment.

The expected plan also envisions that the number of any foreign community must not exceed 25 percent of the Kuwaiti population.

If this item is to be strictly implemented, at least 600,000 Indians and 300,000 Egyptians, the two communities that largely exceed the expected limit, must be among those who will be reduced. The proposal does not explain the mechanism for implementing the cuts and who will be included. It does not also say if the cuts will involve 650,000 domestic helpers.

All Employees To Receive Full Salary Of April Month Without Any Deduction Citizens and expatriates will receive their full salaries in April without any loan deduction or other consumer installments, reports Al-Anba daily. The April salaries will be paid before the holy mon... April 05, 2020 1 15304 Category: General

Legal Action Against Sponsors Encouraging Workers To Leave Mahboula Area Kuwait Ministry of Interior (MoI) stopped expatriate workers from leaving Mahboula Area, south of Kuwait City, as instructed by their sponsors and ordered them to return to their homes, the ministry s... April 06, 2020 0 12217 Category: Coronavirus

Secretary Working in KOC Tested Positive for Coronavirus (Covid 19) An Indian secretary working for a contracting company for Kuwait Oil Company was found infected with coronavirus, Al Rai reported today. The paper said that 12 cases of contact with the secretary were... April 07, 2020 0 7803 Category: Coronavirus

Lockdown Jleeb & Mahboula and Curfew Time Extended The council of Ministers, in its extra ordinary cabinet meeting today decided to extend the curfew hours until six in the morning. The curfew will be from 5:00 pm till next day morning 6:00 am In a... April 06, 2020 0 7404 Category: Coronavirus

Legal Measures Will Be Taken Immediately On Housing Bachelors In Residential Areas The Minister of State for Municipal Affairs, Eng. Walid Al-Jasim, has state that he has directed concerned departments in the municipality to receive complaints by WhatsApp 24727732 about housing bach... April 07, 2020 0 6801 Category: Automotive

Curfew Extension And Area Wise Curfew Discussed In A Meeting Extending curfew hours as well as imposing area wise curfew, especially in areas with dense population of expatriates were among the several issues discussed by the ministerial committee in their meet... April 05, 2020 0 5106 Category: Coronavirus