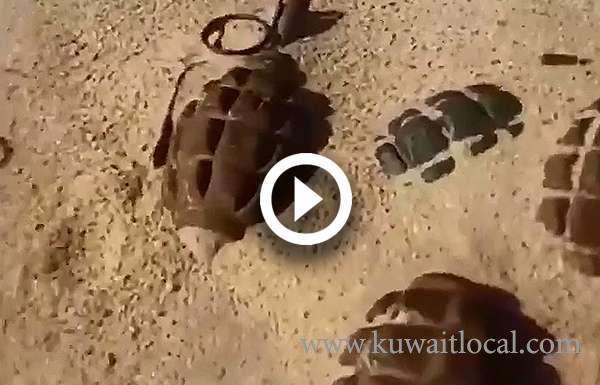 Kuwait Interior Ministry said on Tuesday that it had received 20 reports on appearance of mines due to heavy rain fall in the desert over the past days.

The relations and security information department at the Ministry of Interior (MOI), as part of an awareness campaign, renewed warnings to citizens and expatriates to avoid any unfamiliar objects that might appear in desert areas following the recent heavy rains. Such uncovered objects and items may turn out to be abandoned explosive ordnance (AXO), the ministry warns.

The ministry added that it had received, during the past three days, numerous reports of parts of military remnants in the desert areas of Jahra Governorate. The explosives squad immediately rushed to the area and handled the objects, the MoI statement said, noting that its personnel discovered 48 mines. The ministry called on citizens and residents, namely desert campers, to call 112 when finding any strange objects that may appear following sand drifting due to the recent heavy rains.

It also urged them to take extra precaution and refrain from touching any of these objects, which might be dangerous military waste. The Government, meanwhile, is activating the contingency plan in full in anticipation of further rainfalls, a senior official announced on Tuesday.

This commission’s jurisdictions include inspecting and following up on the damage at Sabah Al-Ahmad residential district, said Minister Boushehri after she emerged from a meeting with the parliamentary housing affairs committee.

Elaborating, she said that the Public Housing Welfare Authority formed special teams to determine the damage in the infrastructure at Sabah Al- Ahmad district and a full report in this regard had been submitted to the public works minister.

On compensating citizens whose properties were damaged in the recent deluge, Boushehri said the Cabinet decided, at its session on Monday, to task a team, chaired by Minister of Social Affairs and Labor Hind Al-Sabeeh, to follow up on the issue and receive complaints.

Kuwait’s meteorological office has warned of an increasing potential for more unstable weather starting Thursday. The unstable weather gripping the country is likely to persist with a chance of intermittent downpours at varying intensities, meteorologist Abdulaziz Al-Qarawi told KUNA on Tuesday.

Friday’s weather will see sporadic rainfall during the day with wind speed of 60 kms per hour, leading to a sevenfoot rise in sea levels and low visibility in some areas, he indicated. The capricious weather patterns are expected to continue until Monday morning, Al-Qarawi added, urging people to log on to www.met.gov.kw for all the latest weather details.

In related news, real estate experts disclosed that some tenants in residential buildings located in areas affected by heavy rains, especially the 10th zone, have started searching for residential units in other areas considering the damages they suffered due to the rainstorm, reports Alrai daily.

They said the affected areas might soon witness mass exodus of tenants who are looking for safe areas to avoid facing the same situation in the future, indicating this might lead to rent reduction in such areas. They pointed out the heavy rains exposed faults in the infrastructure and construction methods in different districts, particularly in the South and Sabah Al-Ahmad.

They explained these faults resulted in fl ooding and water leakage in some apartments which were built not in accordance with the standards; as well as the old buildings that have not been renovated for many years, especially in Fahaheel and Mangaf.

All Employees To Receive Full Salary Of April Month Without Any Deduction Citizens and expatriates will receive their full salaries in April without any loan deduction or other consumer installments, reports Al-Anba daily. The April salaries will be paid before the holy mon... April 05, 2020 1 15306 Category: General

Legal Action Against Sponsors Encouraging Workers To Leave Mahboula Area Kuwait Ministry of Interior (MoI) stopped expatriate workers from leaving Mahboula Area, south of Kuwait City, as instructed by their sponsors and ordered them to return to their homes, the ministry s... April 06, 2020 0 12219 Category: Coronavirus

Secretary Working in KOC Tested Positive for Coronavirus (Covid 19) An Indian secretary working for a contracting company for Kuwait Oil Company was found infected with coronavirus, Al Rai reported today. The paper said that 12 cases of contact with the secretary were... April 07, 2020 0 7804 Category: Coronavirus

Lockdown Jleeb & Mahboula and Curfew Time Extended The council of Ministers, in its extra ordinary cabinet meeting today decided to extend the curfew hours until six in the morning. The curfew will be from 5:00 pm till next day morning 6:00 am In a... April 06, 2020 0 7406 Category: Coronavirus

Legal Measures Will Be Taken Immediately On Housing Bachelors In Residential Areas The Minister of State for Municipal Affairs, Eng. Walid Al-Jasim, has state that he has directed concerned departments in the municipality to receive complaints by WhatsApp 24727732 about housing bach... April 07, 2020 0 6803 Category: Automotive

Curfew Extension And Area Wise Curfew Discussed In A Meeting Extending curfew hours as well as imposing area wise curfew, especially in areas with dense population of expatriates were among the several issues discussed by the ministerial committee in their meet... April 05, 2020 0 5111 Category: Coronavirus