Advanced Search
Scattered, Thunderous Rain Expected In Some Areas, Mangaf Tunnel Will Be Closed In A Precautionary Measure
Category: Kuwait 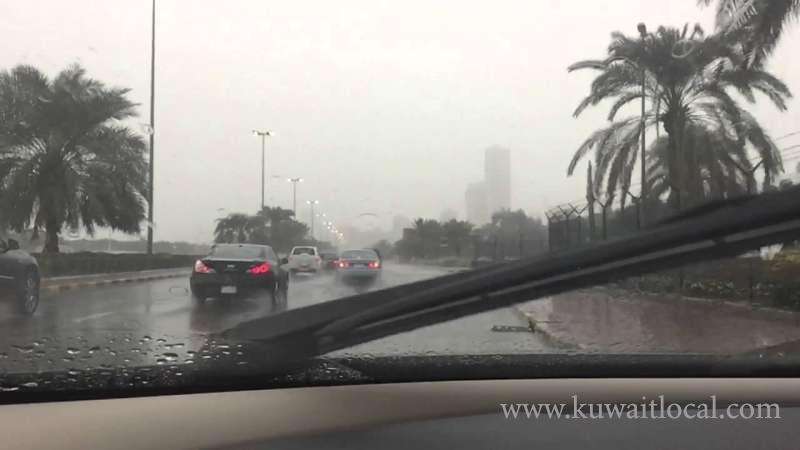 Directorate General of Civil Aviation's Meteorological Department said on Wednesday that Kuwait's weather is currently witnessing unstable conditions with light to moderate freshening at times south easterly wind, with speed of 12 - 42 km/h with a chance for rain that might be thundery at times and visibility will decrease over some areas.

Heavy rainfall is expected in some areas which could lead to accumulation of water and possible torrents especially in areas that have already been filled with the previous rainfall.

As for tonight, he said the country will witness unstable weather condition with moderate to fresh south easterly wind to north easterly wind, with speed of 20 - 45 km/h with a chance for rain that might be thundery at times and visibility will decrease over some areas.

Meanwhile, Minister of Public Works and Minister of State for Municipal Affairs Hossam Al-Roumi stressed on Wednesday that all government bodies are ready to deal with the unstable weather and potential heavy rain today, tomorrow and Friday, as predicted by the Directorate General of Civil Aviation's Meteorological Department.

Ministry of Defense has detected areas of the country affected by rain and began working on setting up barriers to prevent the rainwater from reaching residential areas. National Guard mobilized its vehicles to the city of Sabah Al-Ahmad's residential area and installed additional pumps on the southern rainwater sewers that reach the city in order to carry out suction operations for the largest amount of rain water expected to fall in the next three days.

Minister of Public Works and Minister of State for Municipal Affairs Hossam Al-Roumi said on Wednesday that Mangaf tunnel is currently operating but will be closed in a precautionary measure. The minister said the tunnel will be considered as a reservoir in the event of heavy rain and potential rainwater reaching more than 30 millimeters to prevent rainwater from reaching the houses surrounding the tunnel.

"We now have large pumping machines and we can drain the tunnel. In the case of heavy rains and high tide where there is no discharge of rainwater despite presence of strong water drainage from the pumps, drainage systems may not be able to absorb the amount of rain, and God forbid, nearby homes may overflow", the minister clarified. "So, if the amount of rainwater is increased, the tunnel will be transferred into a semi-tank to protect the lives of citizens and residents, who are the most expensive and most important of all," the minister noted.

Gradual Implementation Of Total Curfew As Per Areas In Country Stringent measures have been enforced due to frequent increase in infection of coronavirus virus where marginal laborer are densely accommodated to contain the spread of infection. Sources stated t... April 01, 2020 0 7773 Category: Coronavirus

Coronavirus Cases In Mahboula On The Rise,MOH Officials Warned Residents To Stay Home Ministry of Health officials have warned residents of Mahboula area to taken extra precautionary measures and not venture outside unless absolutely necessary. In a video that has gone viral, a ministr... March 30, 2020 0 5971 Category: Coronavirus

Total Ban Options On Government Table Today The possibility of enforcing a full curfew is among the  options on the agenda of the Council of Ministers in their meeting tonight, Al Rai newspaper disclosed that a high ranking government reve... March 31, 2020 0 5771 Category: Coronavirus

28 New Coronavirus Cases - 24 Indians And 2 Bangaldeshi Among Them - Total 317 Apr 1: The Kuwaiti Ministry of Health announced Wednesday that 28 people were infected by the novel coronavirus, in the last 24 hours. Total confirmed virus cases are 317 1 case Kuwaiti national... April 01, 2020 0 5013 Category: Coronavirus

7 Indians Infected From Contact With Confirmed Coronavirus Case The Kuwaiti Ministry of Health announced Monday that 11 people were infected by the novel coronavirus, known as COVID-19, in the last 24 hours. With this, the total number of Indians confirmed with co... March 30, 2020 0 4756 Category: Coronavirus