Advanced Search
Silence Of The Investors Has Been Broken Due To Increased Rents
Category: Kuwait 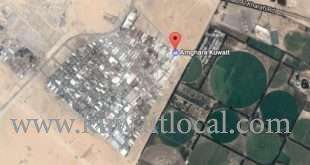 The silence of the investors in Amghara has been broken due to the issue of increased rents and lack of infrastructure stipulated by Public Authority for Industry, reports Al-Seyassah daily.

The investors explained that Amghara has been the source of their income for a long time. However, they have been issued with citations, which led them to file lawsuits. Their lands have been grabbed and the costs have been increased to up to 800 fils per square meter.

The lands are transferred among investors at a high cost whenever electricity is connected for the investors. They urged the concerned ministries to rescue them from this disastrous situation, affirming that the entire place is troubled by certain evil that must be stopped, and thus the concerned authorities should come to their rescue.

The investors expressed concern that the place has been lacking necessary infrastructure, sanitation and amenities for almost 26 years, stressing that the situation has become a source of environmental and electrical disasters, as well as serious pollution for the past several years. According to an investor Ali Al- Bloushi, the investors have been spending huge amounts of money to rent power generators since the government did not provide enough electricity. He also complained about lack of infrastructure to ensure equity among the tenants.

Al-Bloushi explained that some tenants pay 150 fils per square meter, while some others pay 250 fils for the same size. Some others pay 500 fils, many others 600 fils and the rest 700 fils for a square meter of land. He said, “We are prone to intimidation and are forced to pay the rent when the officials begin to transfer ownership from one investor to another for higher rent within three months. If it rains, even a drizzle, the sewage lines are blocked and we are forced to rent tankers to clear the place”.

Another investor Muhanna Al- Mutairi said the investors are fed up of promises, as there are still no services, electricity and water. He complained that the officials, instead of assisting Kuwaitis, wage war against them by causing them trouble through grabbing lands. Al-Mutairi corroborated others by saying the place lacks humanitarian services such as security posts, service centers and even mosques to pray. He stressed that the small structures that are available there were put up by individual efforts of the tenants, adding that they also contribute to renting diesel power generators since the government did not provide sufficient electricity.

Business Drop By 95%, Alshaya Has Prepared To Reduce Costs Several businesses in Kuwait have begun feeling the pinch as a result of the measures taken by the government to contain the spread of coronavirus. Kuwait once a thriving market for retail and travel ... April 02, 2020 0 13464 Category: Kuwait

Gradual Implementation Of Total Curfew As Per Areas In Country Stringent measures have been enforced due to frequent increase in infection of coronavirus virus where marginal laborer are densely accommodated to contain the spread of infection. Sources stated t... April 01, 2020 0 8154 Category: Coronavirus

Coronavirus Cases In Mahboula On The Rise,MOH Officials Warned Residents To Stay Home Ministry of Health officials have warned residents of Mahboula area to taken extra precautionary measures and not venture outside unless absolutely necessary. In a video that has gone viral, a ministr... March 30, 2020 0 6096 Category: Coronavirus

Total Ban Options On Government Table Today The possibility of enforcing a full curfew is among the  options on the agenda of the Council of Ministers in their meeting tonight, Al Rai newspaper disclosed that a high ranking government reve... March 31, 2020 0 5991 Category: Coronavirus

7 Indians Infected From Contact With Confirmed Coronavirus Case The Kuwaiti Ministry of Health announced Monday that 11 people were infected by the novel coronavirus, known as COVID-19, in the last 24 hours. With this, the total number of Indians confirmed with co... March 30, 2020 0 4828 Category: Coronavirus