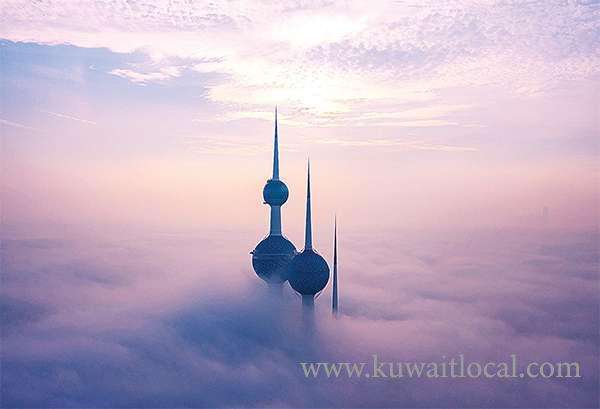 Severe cold wave began yesterday and weather experts warned of temperature to decrease significantly, amid expectations that today it will be sever cold, and will continue until next Thursday reports Al Rai

Weather forecast expert Abdulaziz Al-Qarawi said that the weather expected in the next few hours and days will be very cold, especially in the evening and night, where the minimum temperature is expected to reach the dawn of Tuesday and Wednesday at 2 to below zero degrees Celsius in desert areas. While astronomer Adel Al-Saadoun indicated that the temperature in these areas may reach two degrees below zero.

Meteorologist Mohammed Karam expected the continued impact of the cold air mass on the country until next Thursday, because the air elevation was centered over the Caspian Sea, pointing out that the temperature expected to be recorded tomorrow (Wednesday) will range from two to four degrees in the interior regions, to touch zero in the desert areas.

Everyone started feeling, since yesterday afternoon, the impact of the cold air mass accompanied by northwest winds that were active at intervals, sometimes reaching a speed of 40 kilometers per hour, causing the maximum temperature to be lowered to 14 degrees Celsius.

Karam further stated that the effect of the cold air mass will continue until Thursday, before the weather begins to moderate on Friday, when the maximum temperature is 18 degrees Celsius and the lowest is 8 degrees Celsius.

Labour Camp In Mahboula Quarantined After Technician Tested Positive Covid19 A labour camp in Mahboula area housing almost 600 workers has been quarantined informed sources told The Times, Kuwait On discovery that one Indian technician who was staying at the camp was tested CO... March 28, 2020 0 7072 Category: Automotive

Coronavirus Cases In Mahboula On The Rise,MOH Officials Warned Residents To Stay Home Ministry of Health officials have warned residents of Mahboula area to taken extra precautionary measures and not venture outside unless absolutely necessary. In a video that has gone viral, a ministr... March 30, 2020 0 5673 Category: Coronavirus

7 Indians Infected From Contact With Confirmed Coronavirus Case The Kuwaiti Ministry of Health announced Monday that 11 people were infected by the novel coronavirus, known as COVID-19, in the last 24 hours. With this, the total number of Indians confirmed with co... March 30, 2020 0 4651 Category: Coronavirus

Total Ban Options On Government Table Today The possibility of enforcing a full curfew is among the  options on the agenda of the Council of Ministers in their meeting tonight, Al Rai newspaper disclosed that a high ranking government reve... March 31, 2020 0 4380 Category: Coronavirus

Strict Curfew In Jleeb Al Shuyoukh Jleeb Al Shuyouk has come under the radar of the Ministry of Health who have begun taking rounds in the area to ensure precautionary measures are being followed to contain the spread of coronavirus. ... March 31, 2020 0 4111 Category: Automotive

Gulf Bank Postpones Loans And Credit Card Installments Gulf Bank will postpone all installments of consumer loans and credit cards for six months for all Gulf Bank customers. Moreover, all interest and fees related to these transactions will be waived. Th... March 29, 2020 0 4105 Category: Coronavirus

9 Indians And 3 Bangladeshi Among 20 New Coronavirus Infected Persons The Kuwaiti Ministry of Health announced on Sunday that a further 20 people were infected by the novel coronavirus, known as COVID-19, in the last 24 hours. This brings the Gulf country’s tally ... March 29, 2020 0 3839 Category: Coronavirus