Advanced Search
The Return Of Indian Domestic Workers To Work In The Country Can Be Expected Soon
Category: Kuwait 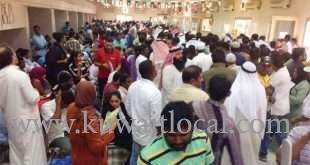 The return of Indian domestic workers to work in the country can be expected soon after all the impediments that had halted the incoming flow of these workers were ironed out.

They revealed that several meetings were held between senior officials from Ministry of Foreign Affairs and Domestic Labor Department under the directives of the Acting Director General of Department for Residency Affairs Major General Abdullah Al-Hajri.

The sources explained that the refusal of Indian authorities to supply Kuwait with domestic labor was based on a number of factors. They included filing of some malicious reports by sponsors about the rights of Indian domestic workers, suspended or delayed payment of salaries for domestic workers, absence of an entity for the domestic workers to reach out to in case of any problems, and the repatriation process of the bodies of Indian expatriates when they die.

The authorities had presented a condition that Kuwaiti citizens who seek the services of Indian domestic workers should deposit KD 700 as financial guarantee. The sources went on to explain that Ministry of Interior had notified Ministry of Foreign Affairs, which in turn informed the Indian Embassy in Kuwait, that the procedures in accordance with the new Domestic Labor Law No. 68/2015 guarantees all labor rights from entry to departure.

The new law also guarantees a shelter for workers in the event of problems between them and their sponsors. If the workers lodge complaints about non-payment of their salaries, the Domestic Labor Department will blacklist the sponsor and block his file such that he cannot file an absconding report against his workers without visiting the department.

Regarding the procedures for collection of any late payments, transfer of mortal remains, or ticket booking, the sources affirmed that these concerns have been addressed in the new law.

They said, “In case of arrears in salaries, the sponsors will be notified. If they do not pay the arrears, Ministry of Interior will do so after carrying out investigations and blacklisting the sponsor and placing a block on his file. This also applies to cases of repatriation of mortal remains and booking of tickets”.

Business Drop By 95%, Alshaya Has Prepared To Reduce Costs Several businesses in Kuwait have begun feeling the pinch as a result of the measures taken by the government to contain the spread of coronavirus. Kuwait once a thriving market for retail and travel ... April 02, 2020 0 9731 Category: Kuwait

Gradual Implementation Of Total Curfew As Per Areas In Country Stringent measures have been enforced due to frequent increase in infection of coronavirus virus where marginal laborer are densely accommodated to contain the spread of infection. Sources stated t... April 01, 2020 0 7912 Category: Coronavirus

Coronavirus Cases In Mahboula On The Rise,MOH Officials Warned Residents To Stay Home Ministry of Health officials have warned residents of Mahboula area to taken extra precautionary measures and not venture outside unless absolutely necessary. In a video that has gone viral, a ministr... March 30, 2020 0 6021 Category: Coronavirus

Total Ban Options On Government Table Today The possibility of enforcing a full curfew is among the  options on the agenda of the Council of Ministers in their meeting tonight, Al Rai newspaper disclosed that a high ranking government reve... March 31, 2020 0 5826 Category: Coronavirus

28 New Coronavirus Cases - 24 Indians And 2 Bangaldeshi Among Them - Total 317 Apr 1: The Kuwaiti Ministry of Health announced Wednesday that 28 people were infected by the novel coronavirus, in the last 24 hours. Total confirmed virus cases are 317 1 case Kuwaiti national... April 01, 2020 0 5082 Category: Coronavirus

7 Indians Infected From Contact With Confirmed Coronavirus Case The Kuwaiti Ministry of Health announced Monday that 11 people were infected by the novel coronavirus, known as COVID-19, in the last 24 hours. With this, the total number of Indians confirmed with co... March 30, 2020 0 4784 Category: Coronavirus

Strict Curfew In Jleeb Al Shuyoukh Jleeb Al Shuyouk has come under the radar of the Ministry of Health who have begun taking rounds in the area to ensure precautionary measures are being followed to contain the spread of coronavirus. ... March 31, 2020 0 4396 Category: Automotive
Popular Videos