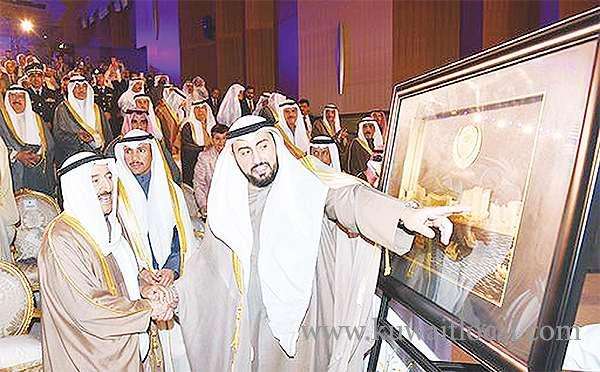 The ceremony was attended by His Highness the Crown Prince Sheikh Nawaf Al-Ahmad Al-Jaber Al-Sabah, Speaker of the National Assembly Marzouq Al-Ghanim, His Highness the Prime Minister Sheikh Jaber Al-Mubarak Al-Hamad Al-Sabah, and senior officials of the state. Delivering his speech at the event, Minister of Health Sheikh Dr Bassel Al-Sabah said that the opening of Sheikh Jaber Al-Ahmad Hospital was a historic event in Kuwait’s healthcare history.

The Sheikh Jaber Al-Ahmad Hospital went through various challenges and phases; however, with the strong directives by His Highness the Amir and the tremendous efforts by all those who were involved in the construction, the dream was brought into reality, said the minister.

The main building of the hospital consists of five towering 10-stories structures built on a 220,000 square meters area, said the minister, adding that the total area in which the whole project was constructed on stretched around 725,000 square meters. Sheikh Dr Basel Al-Sabah said that the hospital bed capacity reached around 1,168 with 36 operation rooms, a medical center, a helipad, and a parking lot accommodating some 5,000 vehicles.

The opening of Sheikh Jaber Al-Ahmad Hospital adds another milestone in the Kuwaiti leadership’s development vision, affirmed Sheikh Sabah who thanked His Highness the Amir for all his efforts. On his part, Health Minister Undersecretary Dr Mustafa Redha said that the hospital would add to the bed capacity of medical facilities in Kuwait to reach over 160,000.

The opening of the hospital is a step in the right direction, affirmed Dr Redha who noted the Sheikh Jaber Al- Ahmad Hospital was an integral part in the ministry’s plans to take medical care to the next level in Kuwait. After the conclusion of the speeches, a documentary depicting the different stages of construction was screened for the attendees.

His Highness the Amir and His Highness the Crown Prince received presents during the ceremony. The first phase of the Sheikh Jaber Al-Ahmad Hospital will be operational by the beginning of next week, said a top facility official Wednesday.

On the sidelines of the hospital’s opening, Executive Director of Sheikh Jaber A-Ahmad Hospital and head of Mubarak Al-Kabeer’s health district Dr Saud Al-Dar’a told KUNA that outpatient clinics and basic medical services such as radiology, laboratories, and nuclear medicine will be available to the masses next week. He revealed that the hospital – consisting of 1,168 beds, 36 operation theaters, and other important facilities – would be a valuable addition to the health service sector in Kuwait.

Labour Camp In Mahboula Quarantined After Technician Tested Positive Covid19 A labour camp in Mahboula area housing almost 600 workers has been quarantined informed sources told The Times, Kuwait On discovery that one Indian technician who was staying at the camp was tested CO... March 28, 2020 0 7085 Category: Automotive

Coronavirus Cases In Mahboula On The Rise,MOH Officials Warned Residents To Stay Home Ministry of Health officials have warned residents of Mahboula area to taken extra precautionary measures and not venture outside unless absolutely necessary. In a video that has gone viral, a ministr... March 30, 2020 0 5724 Category: Coronavirus

Total Ban Options On Government Table Today The possibility of enforcing a full curfew is among the  options on the agenda of the Council of Ministers in their meeting tonight, Al Rai newspaper disclosed that a high ranking government reve... March 31, 2020 0 5034 Category: Coronavirus

7 Indians Infected From Contact With Confirmed Coronavirus Case The Kuwaiti Ministry of Health announced Monday that 11 people were infected by the novel coronavirus, known as COVID-19, in the last 24 hours. With this, the total number of Indians confirmed with co... March 30, 2020 0 4675 Category: Coronavirus

Strict Curfew In Jleeb Al Shuyoukh Jleeb Al Shuyouk has come under the radar of the Ministry of Health who have begun taking rounds in the area to ensure precautionary measures are being followed to contain the spread of coronavirus. ... March 31, 2020 0 4188 Category: Automotive

Gulf Bank Postpones Loans And Credit Card Installments Gulf Bank will postpone all installments of consumer loans and credit cards for six months for all Gulf Bank customers. Moreover, all interest and fees related to these transactions will be waived. Th... March 29, 2020 0 4142 Category: Coronavirus

9 Indians And 3 Bangladeshi Among 20 New Coronavirus Infected Persons The Kuwaiti Ministry of Health announced on Sunday that a further 20 people were infected by the novel coronavirus, known as COVID-19, in the last 24 hours. This brings the Gulf country’s tally ... March 29, 2020 0 3854 Category: Coronavirus

35 Indians among 289 Confirmed Covid19 Cases in Kuwait Ministry of Health today announced that 23 new cases of Coronavirus were confirmed in Kuwait in the last 24 hours. With this, the total number of confirmed cases raises to 289 in the country. 8 of ... March 31, 2020 0 3833 Category: Coronavirus
Popular Videos