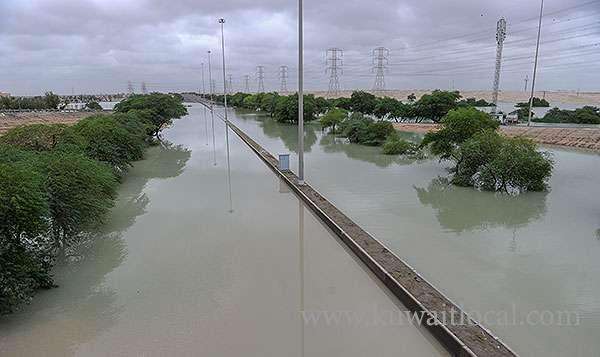 The new blend of asphalt has not yet been tested in order to be described as a failure, reports Al-Rai daily quoting informed sources from Ministry of Public Works.

They stressed that the new blend, which includes polymer substances, has not been used yet due to the long time required for carrying out the procedures that precede the use of the blend as well as the time needed by the asphalt factory to prepare the new blend.

The sources affirmed that the problem of flying gravel is prevalent on roads that were built many years ago and have not been maintained for years. They stressed the keenness of Ministry of Public Works to remove all remnants of the rain from the streets with the cooperation of Kuwait Municipality and other relevant bodies.

The sources explained that the roads that sustained damages due to the rains and are still under guarantee will be repaired by the same contractor at his own expense. For the repair of the other roads, new tenders will soon be floated.

The report on the investigations conducted on the flooding of Mangaf Underpass in 2017 reveal some mistakes and highlight the weak monitoring and supervising by the concerned authorities particularly Ministry of Public Works.

Business Drop By 95%, Alshaya Has Prepared To Reduce Costs Several businesses in Kuwait have begun feeling the pinch as a result of the measures taken by the government to contain the spread of coronavirus. Kuwait once a thriving market for retail and travel ... April 02, 2020 0 13209 Category: Kuwait

Gradual Implementation Of Total Curfew As Per Areas In Country Stringent measures have been enforced due to frequent increase in infection of coronavirus virus where marginal laborer are densely accommodated to contain the spread of infection. Sources stated t... April 01, 2020 0 8136 Category: Coronavirus

Coronavirus Cases In Mahboula On The Rise,MOH Officials Warned Residents To Stay Home Ministry of Health officials have warned residents of Mahboula area to taken extra precautionary measures and not venture outside unless absolutely necessary. In a video that has gone viral, a ministr... March 30, 2020 0 6081 Category: Coronavirus

Total Ban Options On Government Table Today The possibility of enforcing a full curfew is among the  options on the agenda of the Council of Ministers in their meeting tonight, Al Rai newspaper disclosed that a high ranking government reve... March 31, 2020 0 5975 Category: Coronavirus

28 New Coronavirus Cases - 24 Indians And 2 Bangaldeshi Among Them - Total 317 Apr 1: The Kuwaiti Ministry of Health announced Wednesday that 28 people were infected by the novel coronavirus, in the last 24 hours. Total confirmed virus cases are 317 1 case Kuwaiti national... April 01, 2020 0 5161 Category: Coronavirus

Strict Curfew In Jleeb Al Shuyoukh Jleeb Al Shuyouk has come under the radar of the Ministry of Health who have begun taking rounds in the area to ensure precautionary measures are being followed to contain the spread of coronavirus. ... March 31, 2020 0 4416 Category: Automotive
Popular Videos