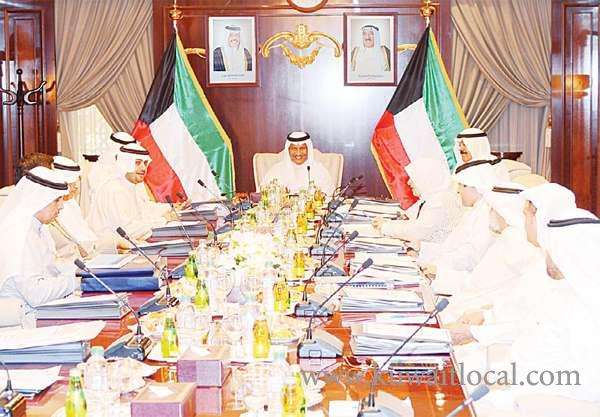 The Kuwaiti Cabinet on Monday welcomed the visit to be started by Turkish President Recep Tayyip Erdogan to Kuwait on Tuesday, which is part of existing good relations between both friendly countries.

The Cabinet voiced confidence during its routine weekly meeting that the visit will lead to fulfilling its goals of promoting and developing cooperative relations between both friendly countries, Minister of State for Cabinet Affairs Sheikh Mohammad Abdullah Al-Mubarak Al- Sabah said in a statement following the Cabinet’s weekly meeting.

The Cabinet was apprised of the outcomes of the visit paid by Egyptian President Abdelfattah El-Sisi to Kuwait on May 7-8, and bilateral talks on distinguished historical ties between Kuwait and Egypt, along with the latest regional developments. In this context, the ministers voiced satisfaction with the fact that both sides shared the same views on different issues of both sides in a friendly atmosphere that prevailed the talks.

During the meeting, First Deputy Prime Minister and Foreign Minister Sheikh Sabah Al-Khaled Al-Hamad Al-Sabah briefed the ministers on the outcomes of the recent visit by a European Union (EU) delegation to Kuwait, where ways of promoting bilateral ties and the latest regional and international developments were discussed. He also kept the Cabinet posted on the results of the recent visit to Kuwait by UN Secretary General’s special representative and Chairman of the UN Assistant Mission in Iraq Yan Kobish.

Then, First Deputy Prime Minister and Minister of Finance Anas Al-Saleh elaborated on the results of the 106th meeting of the GCC’s financial and economic cooperation committee at the level of ministers of finance and economy, during which pan-Gulf integration was addressed. Furthermore, the ministers asked concerned state agencies to take all necessary measures to facilitate and speed up the completion of the new terminal at Kuwait International Airport.

On the other hand, the Cabinet condemned a recent “terrorist” attack on a UN camp in north Mali, which left nine troops dead or wounded. The Cabinet reiterated Kuwait’s objection to such criminal acts that runs counter to all heavenly religions and human values and norms. The Cabinet also congratulated French President-elect Emmanuel Macron, wishing him best of luck and a further promotion and development of existing friendly relations between Kuwait and France.

Business Drop By 95%, Alshaya Has Prepared To Reduce Costs Several businesses in Kuwait have begun feeling the pinch as a result of the measures taken by the government to contain the spread of coronavirus. Kuwait once a thriving market for retail and travel ... April 02, 2020 0 13449 Category: Kuwait

Gradual Implementation Of Total Curfew As Per Areas In Country Stringent measures have been enforced due to frequent increase in infection of coronavirus virus where marginal laborer are densely accommodated to contain the spread of infection. Sources stated t... April 01, 2020 0 8154 Category: Coronavirus

Total Ban Options On Government Table Today The possibility of enforcing a full curfew is among the  options on the agenda of the Council of Ministers in their meeting tonight, Al Rai newspaper disclosed that a high ranking government reve... March 31, 2020 0 5990 Category: Coronavirus

7 Indians Infected From Contact With Confirmed Coronavirus Case The Kuwaiti Ministry of Health announced Monday that 11 people were infected by the novel coronavirus, known as COVID-19, in the last 24 hours. With this, the total number of Indians confirmed with co... March 30, 2020 0 4826 Category: Coronavirus