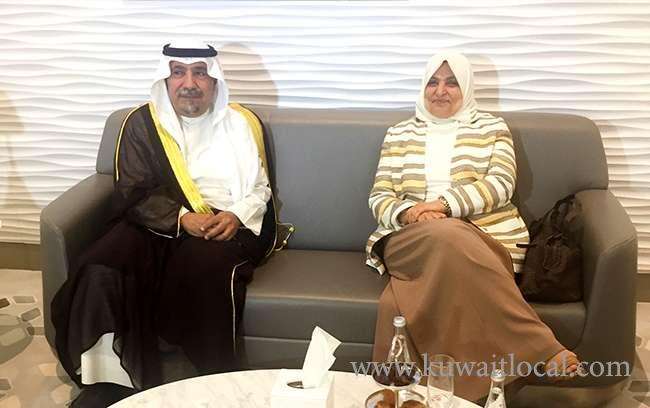 Kuwaiti Minister of Social Affairs and Labor Hind Al-Sabeeh said Saturday the 17th edition of Doha Forum will discuss ways to achieve stability and prosperity in the Middle East and beyond with emphasis on the refugee crisis.

Themed "Development, Stability and Refugee Crisis," the Doha Forum 2017 will open tomorrow, May 14, under auspices of Qatari Amir Sheikh Tamim bin Hamad Al Thani with nearly 600 head of state and government, decision-makers and economists and academics as well as representatives of civil society organizations from around the world.

Al-Sabeeh, who doubles as Minister of State for Economic Affairs, represents His Highness the Amir of Kuwait Sheikh Sabah Al-Ahmad Al-Jaber Al-Sabah at the two-day gathering.

Speaking to KUNA upon her arrival, she said the State of Kuwait attaches great importance to international efforts meant to address the humanitarian disasters and alleviate the suffering of refugees in the Middle East and other parts of the world.

"The crisis in Syria displaced millions of people and promoted Kuwait to host three pledging conferences for the UN's Syria appeals which raised USD 1.5 billion in 2013, USD 2.4 billion in 2014, and USD 3.8 billion in 2015," the minister recalled.

She noted that Kuwait, together with Germany, Norway, the UK and the United Nations, co-chaired the Supporting Syria and the Region London 2016. "Besides the political, legal and humanitarian dimensions of the refugee crisis, Doha Forum will discuss the challenges facing economic development and investment in the region," Al-Sabeeh went on.

"The gathering will also deal with the possible impacts of the US and Russian policies on the security of the region and the outlook of the oil market as well as the relationship between the Gulf region and neighboring countries.

"While developing Kuwait's five-year development plan, the General Secretariat of the Supreme Council for Planning and Development took stock of the future trends of the economic, political and security conditions in the region and made this plan ready to accommodate to new changes," she added.

The minister was welcomed at Hamad International Airport by Kuwait Ambassador to Qatar Hafiz Mohammad Al-Ajami and a number of diplomatic staff of the embassy.

Coronavirus Cases In Mahboula On The Rise,MOH Officials Warned Residents To Stay Home Ministry of Health officials have warned residents of Mahboula area to taken extra precautionary measures and not venture outside unless absolutely necessary. In a video that has gone viral, a ministr... March 30, 2020 0 5568 Category: Coronavirus

7 Indians Infected From Contact With Confirmed Coronavirus Case The Kuwaiti Ministry of Health announced Monday that 11 people were infected by the novel coronavirus, known as COVID-19, in the last 24 hours. With this, the total number of Indians confirmed with co... March 30, 2020 0 4605 Category: Coronavirus

Gulf Bank Postpones Loans And Credit Card Installments Gulf Bank will postpone all installments of consumer loans and credit cards for six months for all Gulf Bank customers. Moreover, all interest and fees related to these transactions will be waived. Th... March 29, 2020 0 3982 Category: Coronavirus

Strict Curfew In Jleeb Al Shuyoukh Jleeb Al Shuyouk has come under the radar of the Ministry of Health who have begun taking rounds in the area to ensure precautionary measures are being followed to contain the spread of coronavirus. ... March 31, 2020 0 3870 Category: Automotive

9 Indians And 3 Bangladeshi Among 20 New Coronavirus Infected Persons The Kuwaiti Ministry of Health announced on Sunday that a further 20 people were infected by the novel coronavirus, known as COVID-19, in the last 24 hours. This brings the Gulf country’s tally ... March 29, 2020 0 3811 Category: Coronavirus

Kuwait Social Affairs Ministry Launches Donation Campaign The Kuwaiti Ministry of Social Affairs on Friday approved launching a campaign to raise donations on Saturday for fighting coronavirus. Up to 41 Kuwaiti charities will pariticpate in the campaign, pro... March 27, 2020 0 3753 Category: Coronavirus