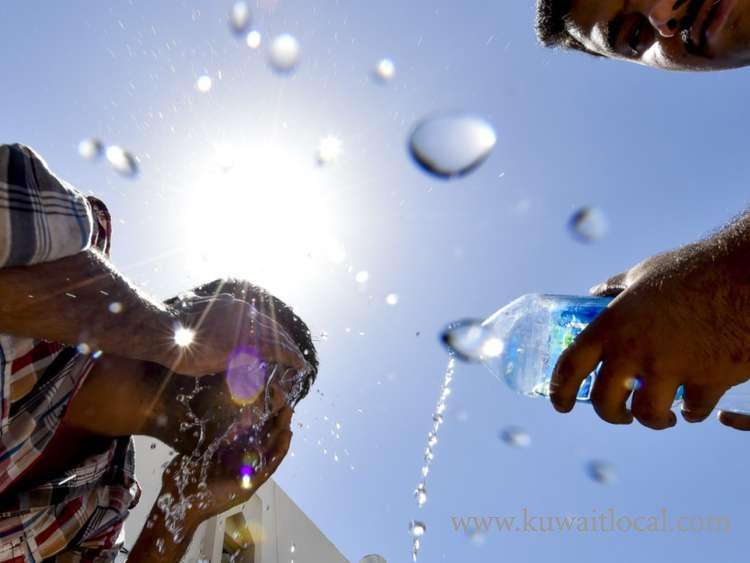 A man died in Kuwait yesterday as the country reels from a heatwave. The man, who died because of a heatstroke, was found with his tools next to his body.

According to Al Rai daily, the police and ambulance raced when reports came in of the ill man, but he was dead by the time they reached him. The forensic reports pointed to overexposure to the sun.

Expected temperature for Kuwait in the coming week.

The heatwave is expected to continue well into the summer season, which officially kicks off on June 21. Arabia Weather website stated that the heatwave has also struck Qatar, Bahrain and the UAE, with the heat being accompanied by a high humidity rate.

Meteorologists in Kuwait have predicted a volatile summer this year, noting that temperatures could reach 68 degrees under the sun next month.

In Iraq the southern province of Maysan recorded a 55.6 degrees Celsius.

Gradual Implementation Of Total Curfew As Per Areas In Country Stringent measures have been enforced due to frequent increase in infection of coronavirus virus where marginal laborer are densely accommodated to contain the spread of infection. Sources stated t... April 01, 2020 0 7403 Category: Coronavirus

Labour Camp In Mahboula Quarantined After Technician Tested Positive Covid19 A labour camp in Mahboula area housing almost 600 workers has been quarantined informed sources told The Times, Kuwait On discovery that one Indian technician who was staying at the camp was tested CO... March 28, 2020 0 7237 Category: Automotive

Coronavirus Cases In Mahboula On The Rise,MOH Officials Warned Residents To Stay Home Ministry of Health officials have warned residents of Mahboula area to taken extra precautionary measures and not venture outside unless absolutely necessary. In a video that has gone viral, a ministr... March 30, 2020 0 5908 Category: Coronavirus

Total Ban Options On Government Table Today The possibility of enforcing a full curfew is among the  options on the agenda of the Council of Ministers in their meeting tonight, Al Rai newspaper disclosed that a high ranking government reve... March 31, 2020 0 5681 Category: Coronavirus

28 New Coronavirus Cases - 24 Indians And 2 Bangaldeshi Among Them - Total 317 Apr 1: The Kuwaiti Ministry of Health announced Wednesday that 28 people were infected by the novel coronavirus, in the last 24 hours. Total confirmed virus cases are 317 1 case Kuwaiti national... April 01, 2020 0 4832 Category: Coronavirus

7 Indians Infected From Contact With Confirmed Coronavirus Case The Kuwaiti Ministry of Health announced Monday that 11 people were infected by the novel coronavirus, known as COVID-19, in the last 24 hours. With this, the total number of Indians confirmed with co... March 30, 2020 0 4734 Category: Coronavirus

Strict Curfew In Jleeb Al Shuyoukh Jleeb Al Shuyouk has come under the radar of the Ministry of Health who have begun taking rounds in the area to ensure precautionary measures are being followed to contain the spread of coronavirus. ... March 31, 2020 0 4339 Category: Automotive
Popular Videos