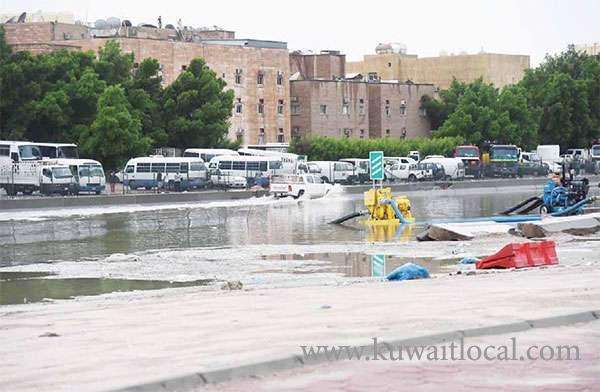 National Assembly Speaker Marzouq Ali Al-Ghanim praised on Thursday all state personnel who helped in dealing with repercussions of the latest bout of torrential rainfalls, assuring citizens that they will be certainly compensated for damage inflicted in their properties.

The Parliament Speaker, in remarks posted on Twitter, said Kuwait, yesterday, passed through “the hardest phase of the heavy raining wave without recording any fatality or serious injuries. “Who never thanks people never thanks (His Almighty) Allah and I would like to address appreciation to personnel of the various sectors who have dealt with the rainfall, namely those serving in the Ministry of Interior, the National Guard, the Army, the fire, public works departments, the Civil Defense, the ministries of health and information as well as other departments,” said the Speaker, shortly after the downpour largely subsided all over Kuwait.

Despite the intense rain, “Our sons and brothers, the departments’ personnel, have overcome themselves working day and night for dealing with the impact of this wave and they have greatly succeeded,” Al-Ghanim added. The Kuwaiti youth have proven that they are up to the challenges at crises’ times, the Speaker continued. As to the damage inflicted at some installations, houses and properties, “We affirm once again that the compensation for the damage is an earned duty and not subject to controversy.

Government
“The issue as far as the government is concerned is a matter of time for finding the proper and regulating mechanisms for the compensations.” The rainfall that has uncovered some flaws is an opportunity for review and bringing the slack personnel into accountability “whoever he maybe,” he has emphasized.

In another development, Kuwait’s General Department of Civil Defense said that 148 people who were affected by the heavy rains have been sheltered at 29 hotel apartments.

These shelters were made available by the GDCD in Al-Amadi Governorate for the citizens and expatriates whose homes were damaged by the rains, the GDCD spokesperson Col Jamal Al-Fuderi told KUNA on Wednesday night.

Upon receiving notification from people in trouble, rescue teams rushed to offer a helping hand and took them to the nearest shelters, Col Al- Fuderi added.

Gradual Implementation Of Total Curfew As Per Areas In Country Stringent measures have been enforced due to frequent increase in infection of coronavirus virus where marginal laborer are densely accommodated to contain the spread of infection. Sources stated t... April 01, 2020 0 7783 Category: Coronavirus

28 New Coronavirus Cases - 24 Indians And 2 Bangaldeshi Among Them - Total 317 Apr 1: The Kuwaiti Ministry of Health announced Wednesday that 28 people were infected by the novel coronavirus, in the last 24 hours. Total confirmed virus cases are 317 1 case Kuwaiti national... April 01, 2020 0 5021 Category: Coronavirus