Advanced Search
PAAAFR Announced That The Perished Fish In The Gulf Waters Has Diminished
Category: Kuwait 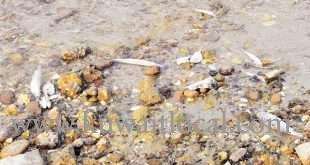 Kuwait’s Public Authority for Agricultural Affairs and Fish Resources (PAAAFR) announced on Sunday that the perished fish phenomenon in the Gulf waters has diminished.

A press release by PAAAFR said that sea surveillance conducted over the last three days showed that no perished fish was found, noting that the fact that decomposed fish was found floating over the water surface indicated that this phenomenon was on the wane.

The Authority hailed the citizens for their eagerness to keep marine environment safe, pointing out that the social media networks have contributed to controlling the phenomenon. PAAAFR had formed a panel to determine the exact cause of recent fish perishing in the Arabian Gulf water.

Commerce
Minister of Commerce and Industry Khaled Al-Roudhan has issued a number of resolutions for temporarily banning all types of poultry meat (fresh, chilled, frozen and processed) and derivatives, as well as eggs except for those pasteurized at 70°C, from a number of countries including Togo, India, Bosnia and Herzegovina, Cameroon, Belgium, Poland, Austria, Switzerland, Sweden, Lithuania, Iran, Croatia, South Korea, Portugal, Macedonia and Nepal as well as the US states of Tennessee and Alabama, reports Al-Anba daily.

Labour Camp In Mahboula Quarantined After Technician Tested Positive Covid19 A labour camp in Mahboula area housing almost 600 workers has been quarantined informed sources told The Times, Kuwait On discovery that one Indian technician who was staying at the camp was tested CO... March 28, 2020 0 7105 Category: Automotive

Coronavirus Cases In Mahboula On The Rise,MOH Officials Warned Residents To Stay Home Ministry of Health officials have warned residents of Mahboula area to taken extra precautionary measures and not venture outside unless absolutely necessary. In a video that has gone viral, a ministr... March 30, 2020 0 5754 Category: Coronavirus

Total Ban Options On Government Table Today The possibility of enforcing a full curfew is among the  options on the agenda of the Council of Ministers in their meeting tonight, Al Rai newspaper disclosed that a high ranking government reve... March 31, 2020 0 5171 Category: Coronavirus

7 Indians Infected From Contact With Confirmed Coronavirus Case The Kuwaiti Ministry of Health announced Monday that 11 people were infected by the novel coronavirus, known as COVID-19, in the last 24 hours. With this, the total number of Indians confirmed with co... March 30, 2020 0 4680 Category: Coronavirus

Strict Curfew In Jleeb Al Shuyoukh Jleeb Al Shuyouk has come under the radar of the Ministry of Health who have begun taking rounds in the area to ensure precautionary measures are being followed to contain the spread of coronavirus. ... March 31, 2020 0 4221 Category: Automotive

Gulf Bank Postpones Loans And Credit Card Installments Gulf Bank will postpone all installments of consumer loans and credit cards for six months for all Gulf Bank customers. Moreover, all interest and fees related to these transactions will be waived. Th... March 29, 2020 0 4158 Category: Coronavirus

35 Indians among 289 Confirmed Covid19 Cases in Kuwait Ministry of Health today announced that 23 new cases of Coronavirus were confirmed in Kuwait in the last 24 hours. With this, the total number of confirmed cases raises to 289 in the country. 8 of ... March 31, 2020 0 3876 Category: Coronavirus

9 Indians And 3 Bangladeshi Among 20 New Coronavirus Infected Persons The Kuwaiti Ministry of Health announced on Sunday that a further 20 people were infected by the novel coronavirus, known as COVID-19, in the last 24 hours. This brings the Gulf country’s tally ... March 29, 2020 0 3857 Category: Coronavirus
Popular Videos