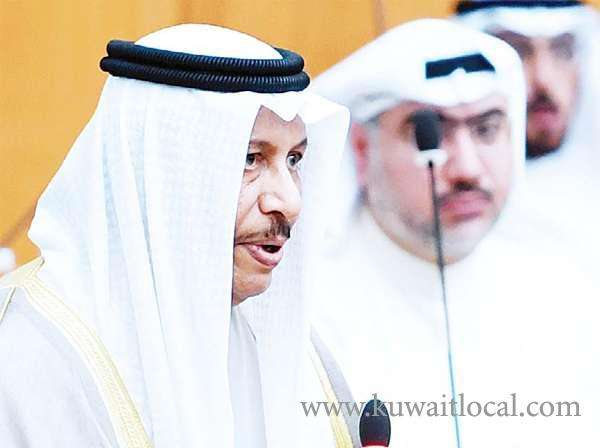 The no-confidence vote against the premier did not push through as the proponents of the interpellations failed to collect the signatures of 10 lawmakers. After the debate on the first interpellation motion submitted by MPs Waleed Al-Tabtabaei, Mohamed Al-Mutair and Shuaib Al-Muwaizri; the Parliament agreed to set up a commission of inquiry consisting of MPs Rakan Al-Nisf, Jaman Al-Harbash and Auda Al-Ruwaei to follow up issues mentioned in the grilling. An hour before the end this debate, six MPs reportedly signed the no-confidence motion against the prime minister — Waleed Al-Tabtabaei , Riyadh Al-Adsani, Shuwaib Al-Muwaizri, Mohammed Al-Mutair, Abdulkareem Al-Kandari and Abdullah Al-Roumi.

In their request, the MPs cited articles 101 and 102 of the Constitution in presenting the no-confidence motion against the premier. Article 101 (Vote of No Confidence)

[1] Every minister is answerable to the National Assembly on affairs of his ministry. If the Assembly passes a vote of no-confidence against the minister, he is considered to have resigned as from the date of the vote of noconfidence and shall immediately submit his formal resignation. The question of confidence in a minister may not be raised except upon his request or upon a demand signed by 10 members, following a debate on an interpellation addressed to him.

The Assembly may not make its decision upon such a request before the lapse of seven days from the presentation thereof.

Vote
[2] Withdrawal of confidence from a minister is by majority vote of the members constituting the Assembly excluding ministers as they do not participate in the vote of no-confidence. Article 102 (No-Confidence in the Prime Minister)

[1] The Prime Minister does not hold any portfolio, nor shall the question of confidence in him be raised before the National Assembly.[2] Nevertheless, if the National Assembly decides, in the manner specified in the preceding article, that it cannot cooperate with the Prime Minister, the matter is submitted to the Head of State. In such a case, the Amir may either relieve the Prime Minister of office and appoint a new Cabinet or dissolve the National Assembly.[3] In the event of dissolution, if the new Assembly decides by the abovementioned majority vote that it cannot cooperate with the said Prime Minister, he shall be considered to have resigned as from the date of the decision of the Assembly in this respect, and a new Cabinet shall be formed. A source also disclosed that MPs Saleh Ashour and Faisal Al-Kandari spoke against the prime minister’s grilling, while MPs Jaman Al-Harbash and Ali Al-Daqbasi spoke in favor.

Earlier, Parliament Speaker Marzouq Al- Ghanim ordered the audience to vacate Abdullah Al-Salem Hall in order to start discussing the grilling motion against the premier in a secret session at the request of Minister of Justice and State Minister for National Assembly Affairs Dr Faleh Al-Azeb. Al-Azeb explained the government requested discussion of the two grilling motions behind closed doors based on constitutional responsibility and full confidence in the constructive response of the Parliament which maintains proper parliamentary practice within constitutional frameworks. Since these two interpellations against the prime minister included allegations that the government might touch people’s privacy and affect them if discussed openly, the minister pointed out that Article 30 of the Constitution guarantees personal freedom; thereby, disallowing discussion of certain grilling points openly.

He disclosed the first grilling motion includes accusations of suspicious transactions in exaggerating prices of weapons, including the Euro fighter deal, and these are considered military secrets which cannot be discussed in detail in an open session as it may affect the information given. He said this is due to considerations of the country’s supreme interests, so it is necessary to maintain confidentiality. The minister added Article 94 of the Constitution allows holding a secret session, stipulating that “Sittings of the National Assembly are public, though they may be held in secret upon the request of the government, the president of the Assembly or 10 of its members. The debate on such request is held secretly.”

The minister affirmed that interpellation is one of the most important parliamentary oversight tools, allowing the Assembly to look into the work of the executive branch. He added the Constitution specified practices of an MP who should meet all the established constitutional norms and rules while protecting public interests. At the beginning of the debate, the speaker obtained approval of the Parliament to accept the letter of Al- Muwaizri who requested joining Al- Tabtabaei and Al-Mutair in presenting the grilling motion instead of Marzouk Al-Khalifa whose membership was revoked by the Constitutional Court on May 3, 2017.

The first grilling motion consisted of five points: first is about the violation of law and abuse of power by the government in a selective, retaliatory or politically motivated manner in its interpretation and application of laws by issuing decrees and revoking citizenship of some people.

The second point is violation of international treaties and conventions and abuse of power by the government in a selective, retaliatory or politically motivated manner by issuing legislation that is contrary to its obligations under the International Covenant on Civil and Political Rights.

The third point revolves around rampant corruption and insistence on appointing incompetent and unqualified people to key and strategic positions, while removing competent people with proven aptitudes.

The fourth point addresses the government’s action program that was not prepared on solid foundations and failure to keep strategic assets of the State.

The fifth point focuses on faults of the government such as increasing burdens of citizens and violating the principle of equality.

On the other hand, the second grilling motion against the premier which was filed by MPs Riyadh Al-Adsani and Shuaib Al- Muwaizri focused on one issue – financial, technical, construction and administrative irregularities and lack of tackling such violations due to negligence and poor follow-up.

MoE Allows Travel Without Leave Permits For Resident Teachers, Staff The Ministry of Education (MoE) said Monday that resident teachers and ministry staff can travel back to their respective countries without needing a leave permit. According to the ministry’s tw... March 24, 2020 2 7505 Category: Kuwait

Full Curfiew Is An Available Option On Table MOH spokesperson Dr. Abdullah Al-Sanad says that issuing "Full Curfew" decision is an available option to limit the spread of the Novel #Coronavirus, but we hope that we do not reach to this... March 25, 2020 0 5351 Category: Coronavirus

Banks To Postpone Installment Premiums And Credit Card Payments Without Interest Kuwait banks have decided to postpone loan installments of Kuwaiti citizens and Small and Medium Enterprises (SMEs) for a period of six months and freezing of the interest payment during that time, Al... March 25, 2020 0 5021 Category: Coronavirus

Bangladesh And Sri Lanka Join Philippines And India In Refusing To Receive Their Nationals Bangladesh and Sri Lanka have joined India and the Philippines by refusing to receive their nationals to be deported from Kuwait. A security source told Al-Rai newspaper that the Department of Se... March 24, 2020 1 4192 Category: Coronavirus

COVID-19 Outbreak In Kuwait Under Control - Health Minister Minister of Health Sheikh Dr. Basel Al-Sabah has assured the novel coronavirus (COVID-19) outbreak in Kuwait is manageable. The ministry is monitoring on daily basis some cases of those who had con... March 24, 2020 0 3955 Category: Coronavirus

8 Deportees Among 350 Egyptians To Fly Tomorrow Sources at DGCA revealed that a second Egypt Air flight will carry 350 Egyptians to their country at 4pm on Wednesday, tomorrow. The sources stated that the scheduled flight will arrive tomorrow morni... March 24, 2020 0 3912 Category: Coronavirus

Kuwait Social Affairs Ministry Launches Donation Campaign The Kuwaiti Ministry of Social Affairs on Friday approved launching a campaign to raise donations on Saturday for fighting coronavirus. Up to 41 Kuwaiti charities will pariticpate in the campaign, pro... March 27, 2020 0 3586 Category: Coronavirus 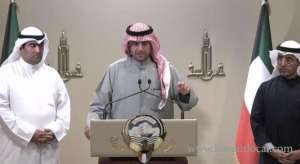