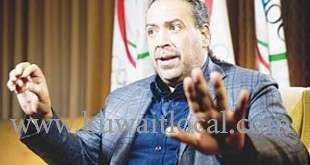 World sport powerbroker Sheikh Ahmad Al-Fahad Al-Sabah announced his resignation Sunday from the FIFA council, saying he did not want to be a distraction while fighting corruption allegations.

Aside from serving on FIFA’s top body, the Kuwaiti heads the influential Association of National Olympic Committees, the Olympic Council of Asia and other senior sport administration posts, including with the Asian Football Confederation (AFC).

Sheikh Ahmad has been named as a coconspirator of disgraced Guam football chief Richard Lai, who pleaded guilty in New York this week to receiving nearly $1 million in bribes from football officials wanting his help to influence FIFA.

The Kuwaiti denied all wrongdoing on Saturday before deciding to step back from his FIFA post on Sunday. “I do not want these allegations to create divisions or distract attention from the upcoming AFC and FIFA Congresses,” he said in an emailed statement. “Therefore, after careful consideration, I have decided it is in the best interests of FIFA and the AFC for me to withdraw my candidacy for the FIFA Council and resign from my current football positions,” he added. “I will continue to support the family of football once these allegations have been disproved.”

FIFA President Gianni Infantino, in a statement, said he had “taken note” of Sheikh Ahmad’s resignation. “I want to thank him for taking this decision which certainly was not easy to take but is in the best interest for FIFA.” Sheikh Ahmad, a former Kuwaiti oil minister, has been linked to bribes accepted by Lai in exchange for backing an Asian candidate in FIFA’s 2011 presidential election and help in gaining control of the AFC. Documents filed with a federal court in Brooklyn identify Lai’s “coconspirator #2” as “a high-ranking official of FIFA, the Kuwait Football Association, and the Olympic Council of Asia”.

Sheikh Ahmad is not mentioned directly, although the documents filed on April 27 say all of Lai’s alleged coconspirators “are known to the United States Attorney”. Co-conspirator #2 is tied to multiple payments aimed at influencing football elections, including a November 2009 transaction worth $200,000. Lai, Pacific island Guam’s football chief since 2001, has been suspended by both FIFA and the AFC after he admitted accepting bribes between 2009 and 2014.

Sheikh Ahmad resigned his candidacy ahead of a FIFA panel deciding whether to remove him on ethical grounds. The FIFA Review Committee, which rules on the integrity of people seeking senior FIFA positions, has been studying the sheikh’s candidacy since the allegations emerged, The Associated Press reported on Saturday.

The FIFA ethics committee is making a separate assessment of whether to provisionally suspend the sheikh, a long-time leader of Kuwait’s soccer federation who was elected to FIFA’s ruling committee in 2015. Resigning from his soccer positions does not necessarily put Sheikh Ahmad out of reach of FIFA ethics prosecutors and judges if any action was taken. In 2012, former FIFA presidential candidate Mohamed bin Hammam of Qatar was banned for life by the ethics committee days after he resigned. Bin Hammam was also clearly identified in Lai’s court hearing for having paid Lai a total of $100,000 in bribes to support the Qatari’s failed challenge to FIFA’s then-president Sepp Blatter in 2011. Bin Hammam was removed from that election contest in a Caribbean bribery case. Sheikh Ahmad has also contacted the IOC’s ethics commission about the allegations against him, the IOC said on Saturday. As president since 2012 of the global group of national Olympic bodies, known as ANOC, Sheikh Ahmad’s support has often been cited as key to winning Olympic election and hosting awards. The sheikh was widely credited for helping Thomas Bach win the IOC presidency in 2013.

Business Drop By 95%, Alshaya Has Prepared To Reduce Costs Several businesses in Kuwait have begun feeling the pinch as a result of the measures taken by the government to contain the spread of coronavirus. Kuwait once a thriving market for retail and travel ... April 02, 2020 0 13432 Category: Kuwait

Gradual Implementation Of Total Curfew As Per Areas In Country Stringent measures have been enforced due to frequent increase in infection of coronavirus virus where marginal laborer are densely accommodated to contain the spread of infection. Sources stated t... April 01, 2020 0 8153 Category: Coronavirus

Total Ban Options On Government Table Today The possibility of enforcing a full curfew is among the  options on the agenda of the Council of Ministers in their meeting tonight, Al Rai newspaper disclosed that a high ranking government reve... March 31, 2020 0 5988 Category: Coronavirus

28 New Coronavirus Cases - 24 Indians And 2 Bangaldeshi Among Them - Total 317 Apr 1: The Kuwaiti Ministry of Health announced Wednesday that 28 people were infected by the novel coronavirus, in the last 24 hours. Total confirmed virus cases are 317 1 case Kuwaiti national... April 01, 2020 0 5167 Category: Coronavirus

7 Indians Infected From Contact With Confirmed Coronavirus Case The Kuwaiti Ministry of Health announced Monday that 11 people were infected by the novel coronavirus, known as COVID-19, in the last 24 hours. With this, the total number of Indians confirmed with co... March 30, 2020 0 4825 Category: Coronavirus